A Stranger in a Stranger's Land 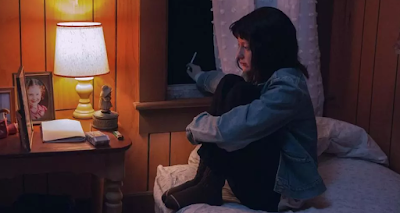 Is there an actress working today more inclined towards amorphousness than Andrea Riseborough? Perhaps Charlize Theron, whose beauty can melt into pure schlump a la Tully, but it's been long enough that I have a handle on Charlize but Andrea, from movie to movie, remains an absolute mystery to me. And I've been fixated on her for going on a full decade ever since she gave way more than she had any reason to in Madonna's godawful W.E. in 2011 - Riseborough was soaring so high above that disaster's reaches it seemed, when she was on-screen anyway, like an actual movie.

Nancy, thankfully, is a far more accomplished product - writer-director Christina Choe found with her star the exact right formless vessel for her tale of shapeshifting menace unfurling towards something deeper, stranger, sadder, lovelier. Riseborough plays a lost young woman who gloms onto anything offering light or sustenance, which her neediness then somewhat apologetically devours, giving whatever bones she leaves in her wake the Michael Myers head-tilt treatment -- she's like well, what was that human thing anyway? She doesn't know. Her eyes are their own haunting, emptying houses.

The first act we watch Nancy in action, weaving her weird way through the world - Nancy is sort of one of those early 90s thrillers a la Single White Female but turned inside out, unbuilt and restructured as something new and far far weirder, bless it's soul. The second act finds Nancy slipping herself into a warm home, a warm bed, a wake of tragedy she can't poke and prod her fingers deep enough into. And just when you think it's horror Choe and Riseborough have way different plans for you. Sticky and cold like the snow that envelopes the story Nancy shows us a quiet world unto its own, and like Riseborough it's hard not to move in, make it ours, fill in all the spaces with all we've got. It will stay, still and fierce, right there inside you. 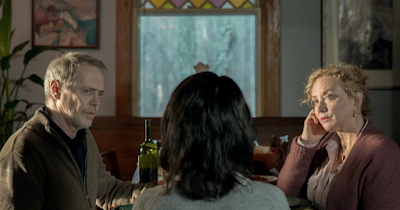 I thought the second half of this was especially strong, and just loved J. Smith-Cameron in it. But as to Riseborough, I agree with your take. After that 1-2 punch a few years back of her work in Oblivion and her work in Birdman I became a big fan (had always liked her) and I appreciate that she makes choices like this.

Glad you mention J Smith Cameron -- I felt bad I didn't. She's such a wonder herself.