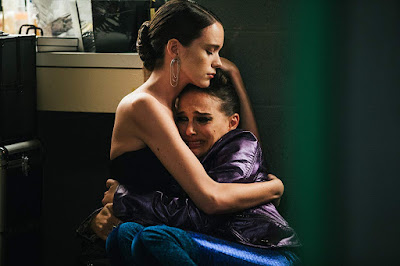 Now that I have seen Vox Lux, Brady Corbet's fatalistic rumination on the pop circus that is modern living starring Natalie Portman as a vulgar train-wreck in sparkly spandex, I... I don't get what's got the other critics so upset? Full disclosure: I'm waiting until after I write this review to go read their reviews proper, so I don't too pollute my own perspective. But without trying I have been aware ever since the film premiered that it's been divisive, to put it mildly, and now that I have seen the film I can't really wrap my head around what it is that's got people angry.

Brady Corbet might not like me saying that - it's not hard to imagine that he enjoys the "provocateur" label - but Vox Lux went down easy as a wine cooler on a hot wet afternoon for me, and knowing its rep going into it I really expected more, well, provoking. (I mean I did just watch Lars von Trier's latest a week ago.) As is I think Vox Lux ties together our culture of violence with our culture of surface pleasures in a smart, sharp, and memorable fashion, with shifting notions of identity, presentation, baked right into the spackle-painted pretty girl face of it.

It oohs and ahhs via murky compositions busted up by neon interruptions, bursts of stage flame, a flick of Natalie Portman's glittery fingernails. There's the occasional Fassbenderian flourish I dug. The Uzi of Damocles hovers over its every Chatty Cathy moment - paparazzi flashbulbs burst with ultraviolence against the dull tin casing of a movie-set city diner. It announces itself god here, a sci-fi something or other, and then just drones on and on, just like our culture do. It's a weird and aggressive little pop art tart, this Vox Lux, and I liked it well enough. Have I got a bullet lodged in my spine because of it? I wouldn't say that much. I'm not bleeding on the beach or anything. I am curious what got everybody's panties so tangled though. My panties are fine, thank you very much. 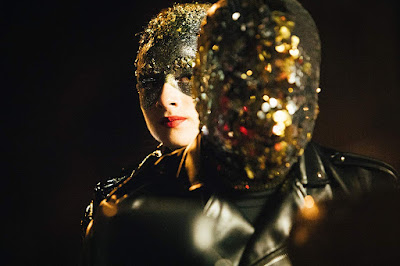 I must say, I kinda of agree in being puzzled by what's gotten people so up in arms. I wonder if is it that people don't like a film beginning with a school shooting and then shifting so aggressively to being about the pop culture that we so gluttonously engage in?

My major problem with was that Portman is given some doozy monologues that spell out the themes so obviously.

Anyway, clearly Bertrand Bonnello's NOCTURAMA was a big inspiration on this which I dug.

Oh man yes I meant to mention NOCTURAMA, I thought that too.