The Light The Heat I Am Complete

Border is based on a story by the Let the Right One In author called "Gräns," which translates not only to "border" but also to "frontier, limit, bounds, confine, division, pale, verge," and all of those words seem apt all at once after witnessing this movie set upon the edge of its queer madness. Border makes sense as the titular catch-all though, given that its central character Tina (a remarkable Eva Melander, working under a mask of Neanderthal-browed prosthetics) works as Customs Inspector at the local airport, using her preternatural abilities of smell to sniff out ill intent. 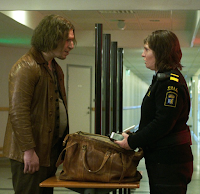 Tina is a bit of a zombie, at first - she probably wouldn't describe herself as "lonely" given she's got a live-in lover and a loving father (who's in the early stages of dementia) and a job she excels at; it would've been easy to isolate this character more, but Border's smarter than that. Instead she just seems to be a part of the world, a state of mind that has crawled out of her ear-holes and reshaped her face it would seem; a mystical inner life turned actually, literally, flesh.

And then one fateful day he walks into her airport. His name is Vore (Eero Milonoff) and he looks like nobody else - that is to say he looks just like Tina. And as with all rom-com meet-cutes (emphasis on anything except for the "cute") the world, meaning the snowy mossy otherworld of semi-rural Sweden, will never be the same again. Tina pulls the string and it all unravels, in luminous ludicrous heaps around her no doubt rough-hewn toes.

If you've seen Let the Right One In (or its American remake) then you've got a good footing for where Border's taking us, with its outsiders finding solace only in their very particular strangenesses - it's a narrow foot-path that Lindqvist has planted his flag upon, but a winning one too, and we're richer for having his atypical fables now here placed in our world, reshaping it in their own image. And Abbasi makes a swell match for the writer, turning his eccentricities into mote-speckled forest day-dreams - images of myth turned tactile, a swollen ridge of elephant skin run underneath our fingertips, deceptively warm and not anything like unreceptive to the touch.