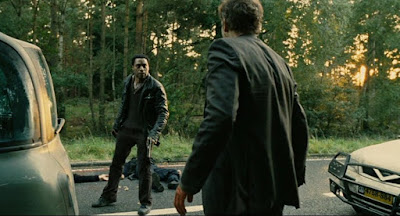 Luke: Julian was wrong. She thought it
could be peaceful. But how can it be peaceful
when they try to take away your dignity?

Twelve years on and Children of Men feels as prescient and as timely as it ever has, which... is a terrifying thing to come to terms with, quite honestly. Children of Men is one movie you want to feel us moving away from, good grief. Well at least we've got a new movie from Alfonso Cuarón (who's turning 57 today) to celebrate amid a world gone madder - ROMA is in some theaters right now, and will hit some more supposedly over the next few weeks before Netflix drops it on their streaming service, and if you've heard the little I've said about the film so far on Twitter, well...
.

There's just nothing even close. Nobody's operating at the level of excellence Cuarón is here. Nobody. I can literally say without a moment or an ounce of hesitation that Alfonso Cuarón is the greatest living filmmaker at this moment in time, period, full stop, do not pass go
— Jason Adams (@JAMNPP) November 27, 2018

There are some filmmakers who make you feel fortunate to be alive during the time they’re blessing the world with their films, and as shitty as the world is Alfonso Cuaron makes me happy to live right here, right now #ROMA pic.twitter.com/upB8pqFkzC
— Jason Adams (@JAMNPP) November 20, 2018