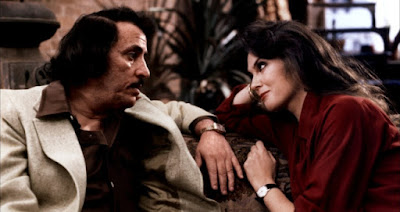 Frank: How come all your models are women?
Anna: Well, it's just something I'm interested in,
as a woman. In fact, this is my fourth series.
It's called "Women Form". Not very original is it?
Frank: Well, it's not the title that matters that much.
Anna: No, I guess not.
Frank: Do you get to keep them all?
Anna: I'm hoping to sell them.
Frank: I wouldn't. I'd keep them forever.
Anna: But why? Part of my profession is to sell
photographs. It's not all for art's sake you know.
Frank: I know but why do you take
pictures of women this way?
Anna: I like to make them look beautiful.
Frank: No, I think it's to preserve them.
You see, the beauty is already in the model.
Anna: Frank, don't be silly. Listen,
I'm the photographer, right?
Frank: Right.
Anna: So, I should know what I'm doing.
Frank: I know, but to me things change. People die.
But in a picture or painting, they're yours forever.
Anna: There's no way you can possess someone forever.
Even in a photograph, there's no way. 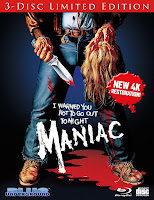 I have watched every horror movie I've ever been able to get my hands on that I've been told is interesting - that is to say I'm passed the point where I'll refuse to watch something because people say it's too disturbing or the subject matter is too grisly. And out of all of those there are only a handful that I've felt bad about the day after - Wes Craven's Last House on the Left being one of them, and yes William Lustig's Maniac being another.

I mean I think they're both great and powerful films, disturbing exactly as they intended - I just felt like scrubbing my eyeballs with bleach after watching them. So on that note - hey look Blue Underground is releasing a super duper fancy 4K restored limited edition blu-ray of Maniac! Here's the trailer for it, which shows you just how crazy gorgeous they got this ugly-hearted movie looking:
.


.
The disc is out on December 11th, just in time to pollute
the stocking of somebody you want to scar for life.
Hit the jump if you want to see all the extra features...

BONUS! Collectable Booklet with new essay by Michael Gingold
.
Who? Jason Adams When? 10:55 AM

Saw the remake of "Maniac" ... ick. Also, I remember squinting my eyes through most of "A Serbian Film" and just feeling awful as a human being

I am not allowed to bring up A Serbian Film again or my boyfriend says he will leave me!

Yeah... my husband kept walking by the TV and saw me gritting my teeth through it. "Why the hell do you watch that shit?" That's such a good question.