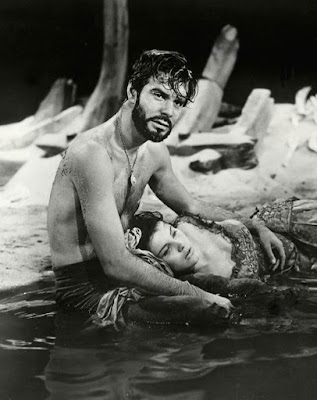 An update on some news that I shared back in September -- the Jacques Tourneur retrospective that the Film Society of Lincoln Center is putting on next month has announced its line-up and schedule and it's every ounce as great as I thought it would be. I was mainly focused on the horror films that Tourneur made with producer Val Lewton -- classic stuff like Cat People and I Walked With a Zombie -- but they're showing so so so much more. Stuff like the 1951 female-led swashbuckler Anne of the Indies starring Jean Peters (as "vilest-hearted she-monster that ever came out of the sea") and Louis Jourdan (pictured above)... 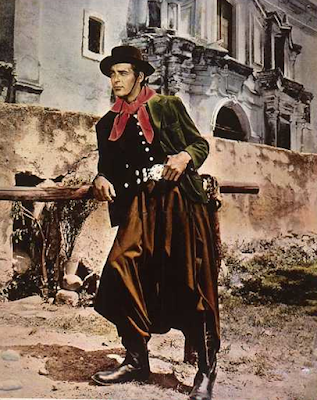 ... and stuff like the 1952 Argentinian technicolor western called Way of the Gaucho starring Rory Calhoun (mmm Rory Calhoun), Gene Tierney, and Rory's titular drawers, seen above. There will be classics like his noir Out of the Past, and then there will be, uh, not classics but quite possibly the most exciting thing they're showing, period, 1965's War-Gods of the Deep (aka City in the Sea), a loooooosely-based adaptation of an Edgar Allan Poe poem starring Vincent Price as, and I quote, " the diabolical overlord of a secret city beneath the sea who holds a trio of unfortunates hostage in his aquatic lair where time stands still and an underwater volcano threatens to blast them all to smithereens." 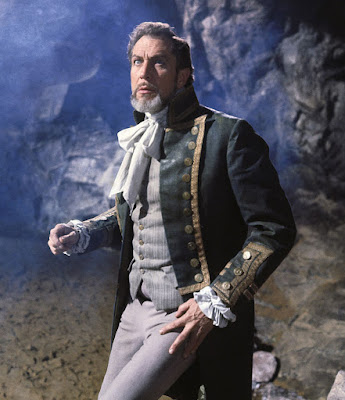 I've never seen this one!
It co-stars Tab Hunter! 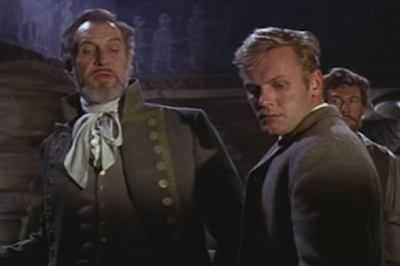 Oh heaven and bliss, I have my holidays all planned out for me now. The series runs from December 14th through January 3rd, check out the great big list of films right here. And lest you think it's nothing but men I'll leave you with this stunning picture of the always stunning Gene Tierney in Way of the Gaucho... 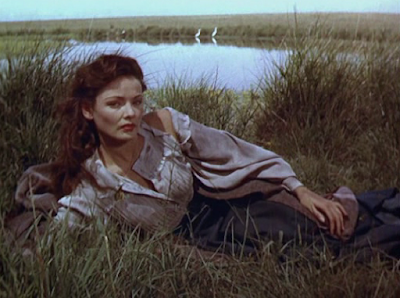 War Gods of the Deep aka City of the Deep has been showing on Comet-TV recently and it's available on YouTube. It's a really rather clever little movie!

Wow some real rarities! I mean Out of the Past is always worth seeing but the chance to view Easy Living (Lucy is so good in it, so are Lizabeth Scott & Mature but it's far from what you expect from Lucy), Canyon Passage (with my girl Susan Hayward), Berlin Express, Timbuktu and Nightfall (Aldo Ray AND Anne Bancroft!) as well as the others you mentioned is irresistible.