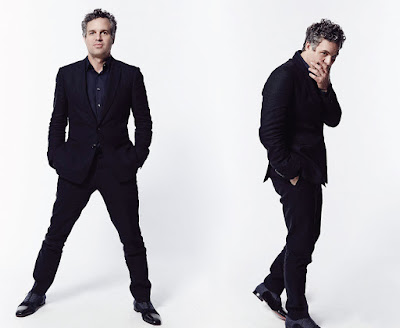 This here website is littered with examples of me getting all worked up about Hifalutin Computer Technology being used to make twins out of an actor I crush on in hopes that we'll get some Hot Narcissus Action, but the only people who've seen it through so far are Jeremie Renier in Double Lover and Dave fucking Franco. (Literally.)

It's not incest if it's computer generated! But despite the tech being there it's been viciously under-exploited - not Tom Hardy in Legend, not Ewan McGregor on Fargo, not the Armie Hammers in The Social Network or my two Jake in Enemy...

Well anyway we're about to see which side Mark Ruffalo will fall on (and I'm guessing the latter) because he's going to play twins for an HBO limited series event called I Know This Much is True, based on the bestselling book by Wally Lamb. Anybody read it? I have not and it sounds way too high-minded for my shenanigans. Here's DH:

"[Ruffalo will] star as identical twin brothers Dominick and Thomas Birdsey in the series. The story follows their parallel lives “in an epic story of betrayal, sacrifice and forgiveness set against the backdrop of 20th century America.”


And this is coming from director Derek Cianfrance, the man behind Blue Valentine and The Place Behind the Pines and The Light Between Oceans (I think I'm like one of ten people who really loves the latter?) so yeah, this will be straights-ville. But probably good anyway, despite that red mark against it! Until then we'll just have to make due with this gif of Mark kissing Matt Bomer from The Normal Heart...

I KNOW THIS MUCH IS TRUE is one of my favorite novels. It's long but it is amazing.