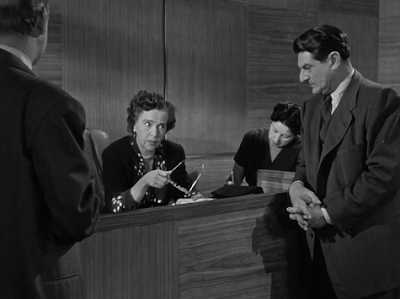 Judge Carroll: You know, counselor, there's
an old saying, there are three sides to every story:
yours, his, and the truth. 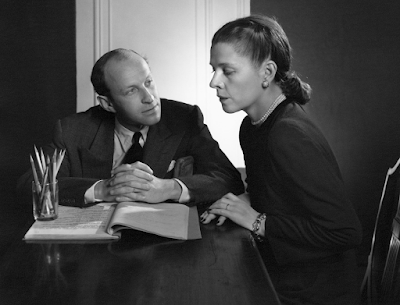 ... bless you to one Miss Ruth Gordon, well-known actress extraordinaire and lesser-known co-writer of The Marrying Kind along with her hubby Garson Kanin. Perhaps it's not "lesser known" at this point that Ruth was also a writer? Besides writing some plays her marriage with Kanin was the foundation upon which the public persona of the "Katharine Hepburn and Spencer Tracy" relationship was built, since she & Kanin wrote the 1949 film Adam's Rib and the 1952 film Pat & Mike for them based on their own thing, and the four of them were all good friends. 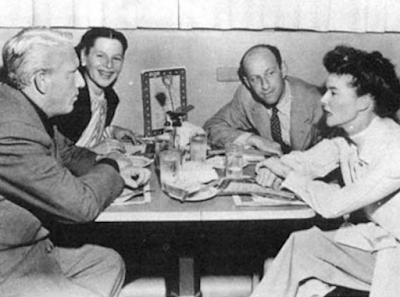 I've always been curious about this from the point of view of the rumors that Hepburn & Tracy were in a so-called "lavender" relationship (aka they were both gay) -- I don't know if we'll ever know how much of their schtick was real and how much was an act they borrowed, with enthusiastic permission obviously, from Ruth & Garson. And that was then shaped into movie magic by that big queen Cukor, who directed all these films! It's a queer conspiracy! 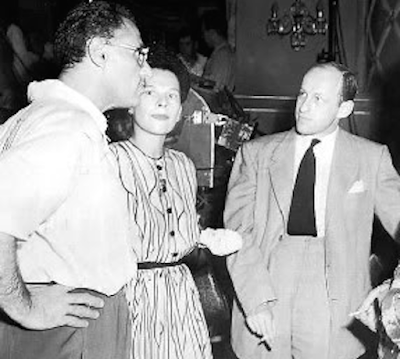 I LOVE The Marrying Kind and bemoan it's relative obscurity. Yes Aldo does look good in those boxer shorts but I think that aside this is the best performance of his I've ever seen. It really uses both his brutishness and underlying sensitivity very well.

But it's Judy Holliday's picture and she is brilliant times two. She was always exceptional in her all too few films (yes even in the negligible and stupidly named Phffft) but this one utilizes all her talents to make Florence into a fully recognizable person. How she wasn't nominated baffles me, she would be my winner for that year. It's my absolute favorite of her work followed closely in order by The Solid Gold Cadillac, It Should Happen to You and Bells Are Ringing. It was her personal favorite of her films as well

The Kanins wrote the script specially for her. It seems incredible but she apparently was feeling unsure of her abilities and was considering retiring from performing so they tailored the film to her and it restored her confidence. Sadly for all of us she only made five films afterwards.

I do want to mention the wonderful performance by Madge Kennedy as the judge. She had been a silent star who had retired 25 years before but the Kanins and the producers coaxed her into coming back and she adds so much to the picture.