Brackett: It's Halloween.
Everyone's entitled to one good scare.

Or forty years worth of good scares! Not to beat a dead babysitter with all the Halloween posts this week but today is officially the 40th anniversary of John Carpenter's original movie -- it opened in Kansas City, Missouri on this day in the year 1978. Kansas City? Why Kansas City? Well according to the film's producer Irwin Yablans in his book The Man Who Created Halloween, Kansas City was chosen for the movie's premiere because... 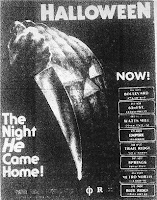 "He figured the area wouldn't attract too much attention and advertising costs there were manageable. The first day resulted in $200 per theater; however, business doubled the following night and the night after that. 'By the end of the first week, Halloween was the biggest thing in Kansas City,' said Yablans. 'It was a phenomenal example of word of mouth.'"


That ad there to the right is one of the original ads used to promote the film in Kansas. The film was made for 300K and ended up growing over 70 million dollars in its original run, which is the equivalent of nearly 300 million in today's dollars -- David Gordon Green's film (read my review here) has already grossed nearly 90 million in less than a week... we'll have to see if it has the legs to reach the original though, since horror movies do tend to drop quick. But this one's got another week of All Hallows on its side and the fact that the only other horror movie opening (Luca Guadagnino's Suspiria remake) is only hitting a couple of theaters this weekend on the coasts. So maybe it can!

Anyway I don't want to get bogged down in box office yammering since for all of its success John Carpenter's film is so much more than dollar signs - it's like a perfect thing dropped out of the heavens... or more precisely raised from the depths of Hell. The film is nearly two hours long but every single frame is accounted for, every moment adding to an accumulation of heavy-breathing atmosphere and chest-heaving terror.
.