Something Wicked Cool This Way Comes 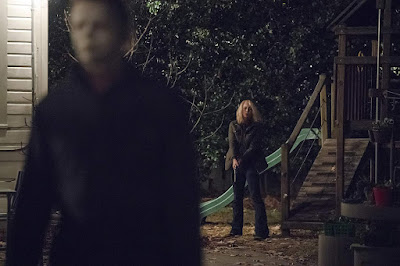 During the filming of the original Halloween Jamie Lee Curtis was asked to make up some lyrics to a love song for her character of Laurie Strode to sing to herself as she strolled down the street of Haddonfield alone. Well not really alone - Michael Myers was of course tagging along, her ever-present dark side, a shadow at her heels. In the final movie you can barely hear what she's saying during this scene, as Laurie's quite a distance down the sidewalk from us when this moment occurs (we're with Michael just then), but what she sings is, "I wish I had you all alone... Just the two of us... I wish I had you close to me... So close... Just the two of us..."
.

In David Gordon Green's remake we get to hear the "original version" of this made-up song - DGG had a band record the song like a lost track from the 1970s, and you can hear it playing on the radio in the background of a scene set towards the start of the movie. Fun, right? It's totally fun. It's also a perfectly good encapsulation of what doesn't really work about this new Halloween - that it mostly exists via clever echoes, spruced up, and not a lot more.
.
It's the hardest to write a review of a movie that you sort of enjoyed but didn't ultimately love, the dreaded mixed place, and that's where I am here - I don't want to make this review come off as scathing, which is a hole I could fall into easily enough given I had outsized expectations for the movie going in. The new movie's fun, and hollering with pleasure alongside an entire enthusiastic audience as Laurie effin' Strode kicks ass late in the movie will remain one of 2018's cinematic high points, for sure. But!
. 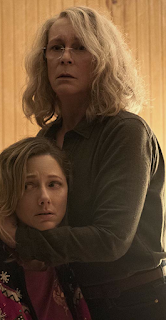 But David Gordon Green's been wanting to make a horror movie for a really long time now, having first heard about it with his attachment to the Suspiria remake a decade or so ago, and I can't help but feel like he should've had a better handle on tone after all these many years of talk. I'm sure I didn't do him any favors watching John Carpenter's original the night before, but Green never comes anywhere near to drenching the town of Haddonfield in the unrelenting dread that Carpenter managed with like one one thousandth of the budget.
.
John Carpenter's film still terrifies me after forty years and dozens of viewings. Green's film has a couple of scary sequences - the gas station scene is brutal in the best way. And everything having to do with blonde-babysitter Vicky (Virginia Gardner) works - if only that actress, who crafts a likable character in a matter of seconds, had been given more to do like perhaps oh fine let's just come out and say it she should have been given the role of Laurie's granddaughter. I wasn't getting anything from the actress they cast in that pivotal role at all, which really cramps up the last act. (And I might have to hand in my so-called gay card for saying this next bit but I also don't really get what Judy Greer, who I normally adore, was doing with her character either.)

Mostly though Green's film just coasts on our memory and love for the original, which is nice - hey look Michael has a scar on his neck where the knitting needle would've stabbed him all those many years ago! - but not enough for the long run. Think of John Carpenter's film as Laurie Strode - she's a survivor. She will last. David Gordon Green's film is Annie, then - she'll get out some great wisecracks and smoke you up, but before you know it her head's in the laundry room window and her ass is in the air and she's making a goofy face as she dies, honking loudly. 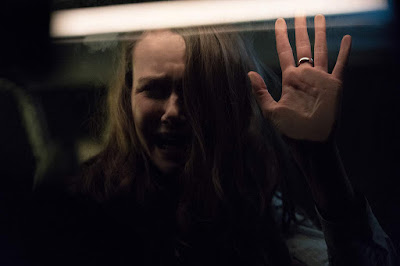 Spot on Jason! Halloween was my first real "serious" horror movie as a kid and it has freaked me out since then. One of my huge problems with this new one is that they moved away from shooting Michael in long shots and did way too many close-ups and quick edit cuts that took away from the looming presence he was in the original. Also, the support cast were ALL bland and horrific. I generally find Judy Greer works better in comedies and her presence here just messes the whole vibe up (SPOILER ALERT: her reaction to the slaughter of her own husband is sort of met with a shrug by her). Laurie's kick ass survival mode is brought in way too late in the film and there's not enough of it.