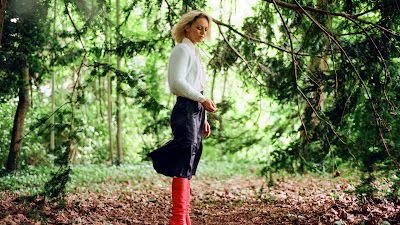 Reporting from the Brooklyn Horror Film Fest for the next week!

There's always been a rabid queerness nipping at the heels of the films of Brian De Palma and Dario Argento - the latter's had a litany of sexually-fluid side-characters, and then of course there's the controversial (even at its time) cross-dressing slasher of Dressed to Kill. But even when they're not being explicit about it the construction of gender and the modern-day subversions of those norms has always been at the front of their minds. Well if not their minds their, uh, cameras, anyway.

More recently filmmakers like Pedro Almodovar began making those subtexts text - Bad Education and The Skin I Live In are lusty treatises on the subject. And now comes Knife + Heart, director Yann Gonzalez's latest which thrusts him right into the company of those mavericks - thrust being the operative word; "opera" being apt while we're at it, too. Call it a Thrusting Opera, then - perhaps in French that phrase will sound nicer? "Opéra de poussée." I like it. (Watch the trailer here.) 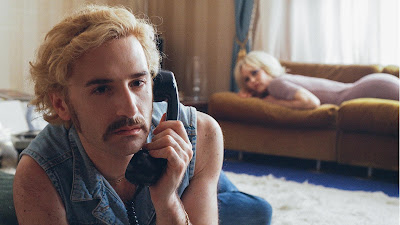 The lesbian Anne Parèze (Vanessa Paradis) directs male homosexual pornography in what appears to be the late 1970s - a banner age for the medium, it must be said, with all the sexual freedom and mustaches to be had. Her movies are arty and ridiculous, but fun and hot too - I thought more than once of the photo-shoots that Faye Dunaway reigns over in Eyes of Laura Mars (Anne's right-hand faggot could be Rene Auberjonois' Gallic cousin in both form and content).

That sexual freedom will of course come crashing down in a couple of years as the plague descends on these folks, and Knife + Heart, while never explicitly referencing that, sends in a murder of crows anyway to start the picking. The leather-faced killer who appears out of the shadows and begins invading scenes from Anne's movies (not to mention reenacting scenes from Cruising) has his back-story - which is laid out to us in a delightfully on-point long-form swerve into la-la-land straight out of the giallo Gonzalez is paying tribute to - but he's nothing if not the cloud of death itself come to roost. It's no accident that the club everybody hangs out at is called The Future - dance yourselves dead, my lovelies. 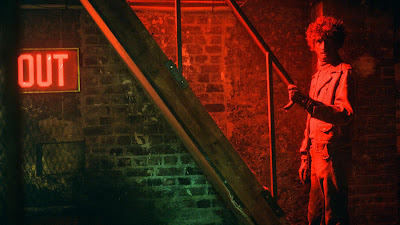 That said Knife + Heart, a pulsing post-Disco nightmare, is nowhere near that simple - this isn't a tit-for-tat allegory casting the gays as a cloud of victimhood to get slashed through one by one. That's because everybody's gay in this world - it only takes the so-called straight-boy half a scene to unearth his inner homo - and the interplay among us, fraught with every complication, psycho-sexual or otherwise, is bracing; this is what it feels like looking from the inside out at our stories. No need to scour the edges of an Argento flick for a little queerish something - it's our time to shine, sweat and semen and blood on the dance-floor.
.

The @BrooklynHorror Film Fest is off to a killer start with KNIFE + HEART, the queer as fuck French techno giallo of your wet nightmares -- see more of what to see here https://t.co/jHfYpEobM5 And stay tuned for some reviews very soon! pic.twitter.com/BUeMAoeMdD
— Jason Adams (@JAMNPP) October 12, 2018

Cannot wait to see this, also just wanted to tell you this is not Yann Gonzalez feature debut, that would be 2013 Les Rencontres de l’apres Minuit, where former french footballer and notorious troublemaker Eric Cantona dons a fake huge penis prosthetic, youre welcome

Damn missed that while scanning IMDB — thanks for the heads up, I’ll correct that, and also I MUST FIND THAT MOVIE ;)