That's Mr. Zombie To You 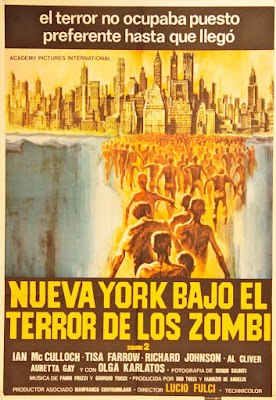 I struggled with a header-image for this post because I find the original one-sheet for Lucio Fulci's Zombie so relentlessly gross that I didn't want to stare at it all day, not with my stomach aching the way it already is anyway. This Spanish (I think?) one above is perfectly agreeable then, although I'll admit the grosser one fits the film more accurately. Anyway big news for Fulci fans, as Blue Underground has announced they're released a super duper fancy blu-ray edition of this splatter classic at the end of November (just in time for feasting) - it's three discs including the soundtrack (!!!) and a heaping assortment of extras, not to mention the "4K restoration from the original uncut and uncensored camera negative." You'll see squirming worms that you've never noticed before it's so clear! 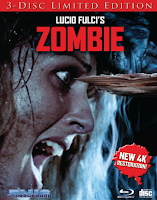 Hilariously the discs come in three different cases with lenticular images from the movie - if you turn it just right you can reenact the film's most infamous scene (the eye on shard of wood scene) yourself! And who wouldn't want to do that? Pick up your copy here, and tell 'em I sent ya! No don't do that, I don't want the zombies to know where I am. You're on your own, suckers.
.
Who? Jason Adams When? 1:11 PM