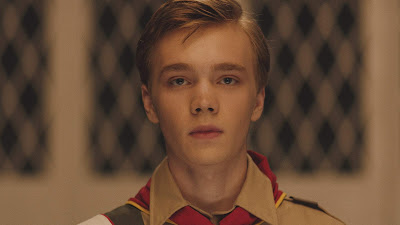 Reporting from the Brooklyn Horror Film Festival this week!


Shakespeare's quote "There are more things in heaven and earth than are dreamt of in your philosophy," has been stuck in my head this week since it's repeated several times in the just-released (and very fine) Haunting of Hill House series on Netflix. It's a great quote for a Ghost Show to swipe - gives a sheen of serious historical and literate heft to the funny business of spooks and specters popping out of a series of ever smaller boxes.

And there are moments in that show (or in something like Hereditary earlier this year) where the film-making's good enough that they manage to twist up this atheist's doubts (of which, yes, I have many) in sturdy emotional allegories - that is to say I stop caring that I don't believe in the afterlife and its movie monsters because what they're signifying with their horror story gets to the root of something true and scary about people, human people, you and me, and what's been done or what is in the process of being done to us every practical day to day.

So yes ghosts can be scary, as can satanic chants, to somebody that doesn't believe in a soul. That being said I tend to reserve my biggest and most lingering frights for the practical matters. The men in masks, those made of plastic or skin or what's under skin. The stuff that stuck in Hereditary, after all the crab-walking across the ceiling, was the sense of familial betrayal - of the should-be-unbreakable bonds being used to strangle instead. And that's where The Clovehitch Killer gets it right. And The Clovehitch Killer gets it very right. 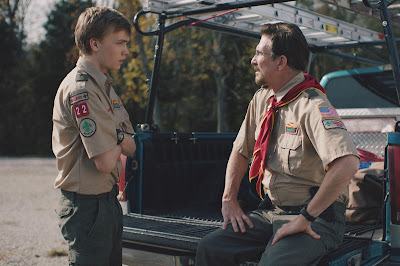 Tyler (Charlie Plummer) is a boy scout. Literally. He's got the badges and the neckerchief to prove it. His Dad (Dylan McDermott, middle-aged out) is the Scout Leader, and together they make a do-gooder tag-team of serious un-hipness. Tyler goes to church, and he smiles sweetly, chastely, at the girl he likes across the aisle. Decency radiates off of him with a sheen some might mistake for acne cream - he is a good boy. So one night when he tempts fate and invites that nice girl to go driving with him, well, you'd be forgiven for being as surprised as she is when she digs a photo of a topless girl bound up with ropes out from under the front seat.

Tyler, you dirty dirty boy. The girl runs. The rumors spread. Only thing is, well, that's not Tyler's picture. That's not Tyler's car. Tyler borrowed Dad's car. Cue the unravelling. Before you know it he's hooked up with the bad girl (an atheist, gasp) from the bad side of town and, shades of Blue Velvet, they're investigating the small-town serial killer that gives the film its knotty title and before you know it Tyler ends up, as inevitably he must, back on his own front stoop, staring in.

If you think you can guess where the film's going from there you might not be wrong, per se - the horror lies not so much in the destination, but the journey, and I was shocked by how wrong The Clovehitch Killer was willing to make that journey seem and feel. Not "wrong" as in poorly made" by any stretch of the imagination - 'wrong" as in "fucked the fuck up." I sat in mid-day sunlight watching this movie growing steadily more unnerved - director Duncan Skiles and screenwriter Christopher Ford aren't afraid to really test the ropes, as it were; see how far they can stretch without breaking.

It doesn't break. The ropes hold. Dylan McDermott is committed like mad here - put this on his clip-reel for eternity; I'll never look at that big handsome lug the same way again. And Charlie Plummer, one of our finest young actors, strikes the mark yet again, making the sink of moral quicksand beneath Tyler's feet an unsteady and palpable dread - never has watching a boy become a man felt so diseased and sickly. The world is a corruption - we are the children of nightmares, made flesh from nowhere and nothing. 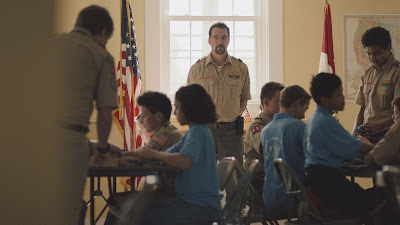