Did you know that Invasion of the Body Snatchers director Philip Kaufman didn't tell Veronica Cartwright that Donald Sutherland was going to do this when they shot this scene? You can read her telling of it in this interview, but that reaction of hers is apparently genuine - she says she'd been told to expect something else and when Donald did the alien-snatched scream reveal he freaked her the fuck out. Funny enough that's exactly how I reacted the first time I saw this movie too! 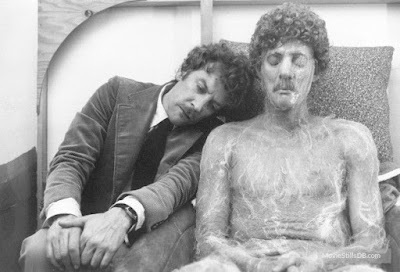 I remember seeing this iteration of the Body Snatchers when it was released (having also seen the original on TV) and being crushed by the ending. By that point, the movie had done what all good movies do, which is draw you in and seduce you in to adopting the cosmology of characters, disbelief temporarily suspended, feeling something of what they feel and becoming invested. I imagined myself at the end of my rope, desperate for some help, looking franticly for an ally, a flash of relief and hope at finding one, only to have the rug pulled out from under my feet. Messed me up for a few hours afterward. Interesting to find out how that played for Ms. Cartwright. Almost as bleak as the ending of the original Dutch-French version of The Vanishing. Directors are sadists sometimes.