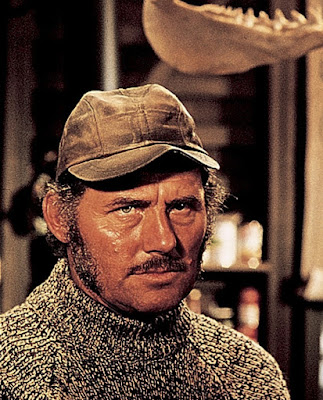 Earlier on in our "13 Mustaches of Halloween" countdown I express incredulity that anyone would find Gary Oldman's Dracula in anyway sexually alluring (and judging by the poll results y'all agree with me) but now I must make an admission in the opposite direction -- I don't understand why Robert Shaw's cocky shark hunter Quint in Spielberg's Jaws isn't a Longstanding Sexual Icon. You just know many a night, kicking back a dozen cold ones with his best mate, one thing leads to another thing and as they say what happens on the Orca stays on the Orca. 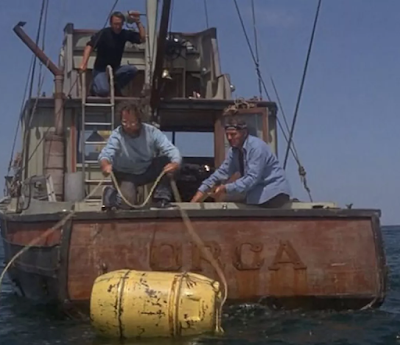 I can't be the only one that picks up on an... energy... between him and Richard Dreyfus though, can I? For all of Quint's little ditties about "bow legged ladies" he's definitely inspected some same sex booty in his day. I bet he uses his story about the Indianapolis Disaster to get everybody feeling all primal, happy to be alive, they start "comparing scars" and then retire to their bunks and before you know it somebody's walking the plank (the plank is his penis)...

There's a definite rough roguish charm to him, and heaven knows he was a randy bastard-Shaw had somewhere in the vicinity of a dozen children, but I always had the distinct impression that Quint would reek of alcohol and that is just off-putting. Shaw was a brilliant actor though.