We Were All Animals Then (Here's a small personal essay inspired by
the film We the Animals, which I already reviewed right here.)

We were called "The Three J's" at every birthday and every Christmas party. J number one was me; J number two was my cousin Jennifer, and number three was my other cousin Jesse. We are each about eight months apart in age, from Jason the eldest to Jesse the youngest, and we grew up together in a very small town with a very small amount of anything to do. We were inseparable little demon children, domestic terrorists in miniature having screaming contests and climbing trees, making forts in the woods. Jenny would pack a loaf of bread in a picnic basket and we'd turn a tumble of fallen branches into an otherworld, queens and knights and mud puddle aristocracies.

I had no friends and I had no siblings, but I always had my two J's. Jesse and I eventually became the closest because we were boys, and that's how that usually shakes out, especially once the squeals and chemical burns of puberty hit - I've still today got a BB lodged in my shoulder from that little asshole, but I wear it fondly, a memory scarred into the meat of me. Once the hormones came I remember the slow chill our parents blasted between Jenny and me hanging out - how our closeness became suspicious, something to be managed, every graze a sudden sign we were Too Close.

Little did the adults realize though that their suspicions were poorly angled - I was super happy to have to hang with Jesse and all his male friends. Jesse was way more easygoing than I was - easy to accomplish when the guys can bond over all the horror movie boobies together - and so he had a lot of friends. And I tagged along gladly for all of the underwear-only swimming parties and depantsing of each other inside sweaty camp tents. And then when I did see Jenny she and I would play her Heartthrob board-game and ogle all the Dream Dates together. 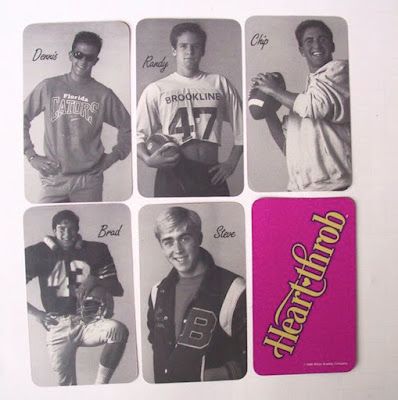 (I'm pretty sure I pocketed the Randy card and took him home for keeps.) Puberty did make a muck of everything, though - as I realized how different I was I turned inward, and every action I made got studied and re-studied until I barely moved; it all just got too complicated. Where were my eyes supposed to go? Why was gym class becoming a confusing hurricane of body parts? Better to just stay in my room and draw elaborate maps of pretend places, and build mountain ranges out of blankets for my action figures to creep between. Imagination became the air itself - I would've suffocated without it. Books and then movies - anything to keep from being just one lonely little nothing without even his other J's to save him.

As Junior High and High School came and scoured me down with daily thoughts of running away and suicide, of finding the train tracks through town and just walking until I fell over from whatever came first, "The Three J's" had entirely ceased to be; at this point in history, here and now, I haven't talked to either of them in years, not since our grandmother's funeral, and their votes in the last election seem to've sealed the lid on all our childhood business for good. I miss them - who they were then, anyway. Who I was then. It felt good, being a part of something that was innocent, doubt-free - something that just was. The memories of that feeling, that boundlessness, do remain scarred into the meat of me. Somewhere. I still look for them all the time.

Thank you for sharing such beauty. You've got many new J's out there, reading and running amok alongside you.

Love your personal posts. Thank you.

Thanks so much for sharing. As so often is the case, you have managed to make someone who grew up under very similar circumstances in a very similar place feel a little less alone.

Love these. Thank you.

One of the many reasons I love this blog, and your writing (I mean, the eye candy is nice too; don't get me wrong). But I'll echo what Shaun said: I identify strongly with your story; I was actually mourning my childhood relationship with my cousins when facebook vomited them up yesterday, and this post also makes me feel less alone. Thank you, sir.

Thank you for sharing. There's a special place in all our hearts for nostalgic love...and oh those initial, innocent affections were so precious.

i can’t wait to read your book