The rituals of pubescence can get weird. Like a dog rubbing its junk on everything weird. I remember going to my friend Jason's house after school and flipping through his father's Hustler stash and then we'd "wrestle" each other and scream "Friction, friction" as we play-acted out sexual positions. Those years are confusing for everybody but there's a special terror in it for queer kids - fear and loathing and danger at every turn. The things you most want to touch might very well slam your face into the floor if you try, while their parents sagely nod along.

We the Animals, Jeremiah Zagar's adaptation of Justin Torres' magnificent fictional memoir, brought those old feelings rushing forth - the sensation of being a part of something one second and then suddenly being thrust violently outside of it the next, through no doing of your own. In a way that's universal for everyone I suppose - the experience of discovering yourself, as an individual, I mean. But for heterosexuals there's usually an entire support structure standing there with smiling faces and wide open arms - wreaths of welcome clotted with baby's breathe and tulle and the school dance apparatchik. Little gay boys are on their own, and the knives are out the second they catch you looking. You learn to divert your eyes, look downward deep.

The film plays like a slow dreamy unraveling of those support structures - the feeling of falling, falling, falling upward, gravity inverted. You're both in the dirt and above the trees, neither nor - mud stuck and flying out of space. It's disorienting, dizzying, confusing as fuck. You get the stars mixed up with the fleas, ticks and Saturn's rings. You become dangerous in your solitude - mean, a sharpened stick at one end and oiled up rags set to blaze on the other. You wanna stab and burn it all - better to strike first, fangs born, than be stricken. 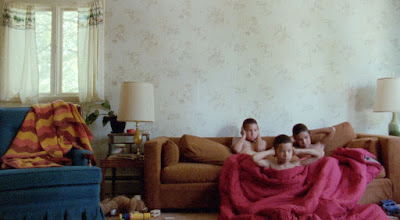 Watching We the Animals was like little I've experienced before - getting our stories told still feels so insane, so unique and unexpected, I'm not getting any more used to it. Every time feels a gift, a blessing, and then the calm cool fury comes - a fury that we've been denied this commiseration, this artistic understanding, for so goddamned long. It's as dizzying as it ever was - I'm still that little kid alone in his room with a million feelings I don't know what to do with and getting shot back there keeps reminding me how much I never got to figure out.

Zagar gets furiously naturalistic performances out of his three boys - the verisimilitude of being there on the ground with them, knees scabbed and sand in your ears, a swift flat slap to a bare backside, you can feel the worms between your toes and the hard sheets. They've got their insane rituals, their stories and makeshift belief systems, that carry them through the day - the logic of them each sussing themselves out as we see their specifics, how they built these things up from parts they're not even aware of themselves. How childhood is a pile of furniture, a series of makeshift forts, play-acting out the world.

And slowly the piles, they tip, shift, the earthquake of adolescence shakes it all to the floor again. A kiss in a basement, a flood. The fuzzy snap of fireflies in electric porch zappers. Your mother locked in her room, bent all up and hissing like the radiator; your father digging your grave in his confusing tighty-whities in the backyard. He holds you in his arms and tells you you're beautiful and you play dead, a princess flung out of the tower, a heap of hair on the ground. What does any of it even mean? Well we're still working on that, son.

beautiful and so painful. What a lovely review.

Thank you for this review. Can't wait to see it.

Saw it yesterday, at the Angelika, I hate that theatre but I love the movies they show. It was an amazing film, and I want to see it again. While I was there I had to see McQueen again, 3rd time, breaks my heart every time I see it.

Beautifully written! Good lord Jason! Were you following me as I was growing up?