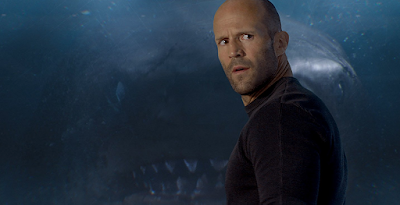 The Meg feels like a first draft, which is nuts seeing as how it's been in development for twenty years. I never read the book upon which it is, uh, based, but something tells me the book filled all 337 of its pages with more than the word "shark" scrawled in increasingly frantic scribbles.

Anyway there is indeed a shark, and there is indeed Jason Statham, and you're already halfway to a movie there so it's not all bad. There's also a scene where leading lady Bingbing Li stares at Statham fresh out of the shower as if she's the shark and his abs are smeared with delicious chum, and that goes a little ways further.

But there are so many missed opportunities, imagination-wise - there's a scene early on where the scientists (I use that word lightly, in the "Tara Reid holding a clipboard" vein) discover the hidden ocean from which the Megalodon (bonus points for getting to hear Statham say the word "Megalodon") will emerge, and instead of offering up a slew of CG wonders we get a couple of squids and one confused Anglerfish gently going about his business.

Give me some strange beasties, y'all! Have some fun with it! Don't give us a shot of the 400 foot tall Guanyin of the South Sea of Sanya sculpture and not make the gigantic shark bite that fucker in half! This isn't actual science, guys! It's a shark movie starring Jason Statham! Act like it!
.
Who? Jason Adams When? 4:35 PM

TOTALLY AGREE. And the little sad attempts to "pay homage" to "Jaws" would have been fun had the movie been campier (the kid asking to go in the water, the dog named Pippin, like "Pippet" in Jaws). I don't know, but there is something about a rubber shark that is infinitely more frightening than anything CG! Jason S. brought ONE BAG from Thailand and must have packed about 22 black sweaters in there. And finally, was it me, but Jason showed his feet a lot in the movie. I'm not complaining AT ALL but you saw more of his bare feet than his abs, which is fine with me. lol. GREAT review! "Suspiria" needs to be released NOW! H.