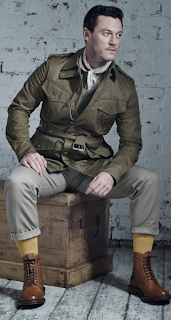 --- Uniform Fetish The Movie - Openly gay blockbuster filmmaker Roland Emmerich - you kind of don't get to call many people that, so I always want to when given the chance - is making a WWII movie next called Midway, and he's just landed... openly... uh... well... you know... openly Luke Evans to star in it. Luke is playing Commander Wade McClusky, a real dude who did real good during that battle. Also starring will be Woody Harrelson and Mandy Moore. And no doubt also a cast of Dunkirk-lite twinks to wear all those uniforms, which aren't gonna wear themselves.

--- Chucky Rises - It's been a very very long time since I last sat down and watch the first Child's Play film from start to finish - perhaps I should have myself a marathon? I actually prefer the goofier later films if I'm being honest - the only dolls I've ever found convincingly creepy were the ones in Stuart Gordon's 1987 psychotic break called Dolls, so Chucky needs the goofiness to land, I've always thought. Anyway they are rebooting the whole thing and remaking the original film, it appears, with a Norwegian director - my guess is to wipe the franchise's convoluted timeline clean (it seriously has gotten tremendously confusing) and try to be straight-up scary. We'll see. If you're not pouring acid on John Waters' face I don't know why we're even here.

--- It Sings At Night - I don't have the same knee-jerk "Hooray!" reaction that a lot of my contemporaries have when new musicals are announced, so I wasn't bouncing around when I read that Lucas Hedges and Sterling K. Brown have signed up to make one - it wasn't until I saw that the thing was being directed by Krisha + It Comes At Night director Trey Edward Shults with music from Trent Reznor that my interest was piqued. That's a fascinating collection of people.

--- The Deer Hunters - I hadn't heard anything about Observe & Report director Jody Hill's new film in ages, and suddenly it turns out it's hitting Netflix this Friday? Which might not be a good sign. It's called The Legacy of a Whitetail Deer Hunter and it stars Hill regular Danny McBride and Josh Brolin as pair of TV deer hunters on a trip with Brolin's distant kid. The movie's got a trailer now which you can watch over here. I guess we'll see, and shortly at that.

--- Duck Ducked Goose - Y'all can stop voting on our poll asking which young actor should play Goose Jr. in the new Top Gun movie - the studio went with Miles Teller, our last-place finisher and the least inspired choice, which shouldn't be surprising since this is the same studio that decided to make a Top Gun sequel in the first place. Anyway I am glad I don't have to see this movie now and that Glen Powell can go make something as funny and great as he is.

--- Beaton It - The documentary Love Cecil, about the pioneering gay photographer Cecil Beaton, is out in theaters now and you should totally seek it out - our pal Glenn explains why today over at The Film Experience. I saw this movie a very long time ago because of a weird connection I've got off-line to the filmmakers - I actually saw one of the very first screenings anywhere for anybody, and it's been eating me up to push the movie but I kind of can't. But it's good! See it!
.
Who? Jason Adams When? 5:00 PM

You are so very right-on about Miles Teller. He is the acting equivalent of Ambien.