For all of Nymphomaniac's explicitness I always thought this demure shot of Shia LaBeouf (who turns 32 today) standing naked behind a dresser covered with books was the sexiest shot in the film... but then there are piles of books and y'all know how I feel about piles of books. Hubba hubba. In all seriousness I think Shia is good in this movie (which I've never actually finished watching all of - I've never made it to Jamie Bell's scenes!) and along with American Honey, well, I hope he figures his shit out. He's got two films in the pipeline that seem pretty risky on paper - there's a modern spin on Huckleberry Finn with Shia opposite an actor with Downs Syndrome called The Peanut Butter Falcon... 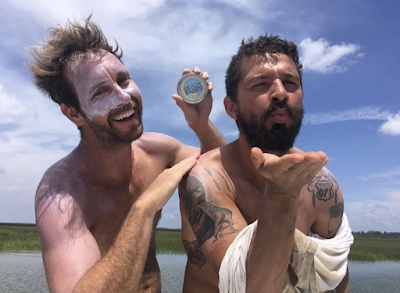 ... that is Shia with its writer-director Tyler Nilson on set. That also stars Dakota Johnson and John Hawkes and Jon Bernthal and Bruce Dern and Thomas Haden Church, which is quite the cast. And then there's Honey Boy, which is an autobiographical retelling of his own childhood that's got him playing his own father. All the names have been changed and I imagine it's going to be fictionalized to a degree, but still. The movie is coming from Israeli director Alma Har'el, who directed that Sigur Rós music video Shia got naked for in 2012...