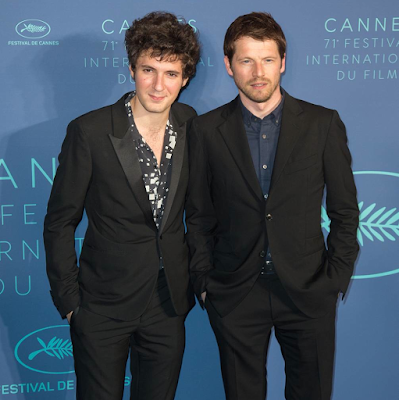 I had just been wishing for a round-up of Cannes men's fashion about five minutes ago when British GQ tweeted out this little compilation of exactly that, proving once again I am god and you should bow to me or perish. Either that or coincidences happen, whatever. Above that's the actors Vincent Lacoste and Pierre Deladonchamps who star in the 90s-set gay film Sorry Angel from Christopher Honoré...
.

I am glad to hear that SORRY ANGEL is good or
whatever but how are the SHELVESSSSS pic.twitter.com/aeIp0FD3CL
— Jason Adams (@JAMNPP) May 10, 2018

.
... which got some good notices from critics at the fest. I'm glad to see Pierre playing gay again so soon after the amazing Stranger by the Lake anyway. But we're not here for them. Instead I wanted to highlight two of my favorite outfits that were of the less-formal sort; it's been a lot of tuxes - which makes sense it being Cannes! - but still Cannes is a beach town, so let's think lighter... 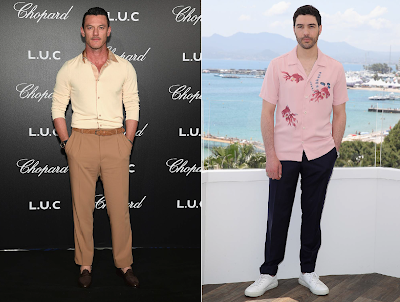 You read GQ? Figures :) It's 2018 and dudes still turn up in that archaic uniform and have the nerve to pose in front of photographers wearing the exact same thing.

I'd say neither to both looks but I like the fish print on Tahar's shirt. Luke is always so basic.

I like Rahim's shirt but the black pants are such a letdown, so let's go with Evans. Even if his outfit is a bit more boring, it at least coheres and he fills it out well.