We All Scream For Olyphant 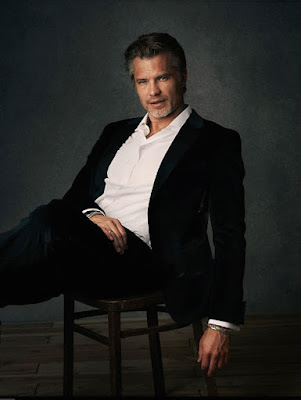 So who watches Santa Clarita Diet? Raises your stumps! I only made it halfway through the first season - even with the gutsy (puns are fun!) humor it's not for me, but I get the appeal if you happen to like it. Drew Barrymore and Timothy Olyphant are very charming people! Check our Timothy Archives for just a superficial inkling of those charms. Anyway it's odd that Tim's never worked with Quentin Tarantino before - he seems the right type, meaning you just know he could spit out that dialogue like something fierce - but it looks like that's about to change because he's in talks for QT's upcoming Charles Manson movie called Once Upon a Time in Hollywood.

Yup I still love that title, and yup I am also incredibly nervous about this movie. Tim's presence soothes me a little bit - more than Brad Pitt or Leonardo Dicaprio because been there done that with them; I really am interested in see Olyphant tackle one of Quentin's iconic creations, whatever it may be. And we have no idea what it might be, they're not saying who he's playing. Well I doubt it's Roman Polanski, at least! (A good guess might be Tex Watson maybe?) Anyway also joining the film this week - Tim Roth and Burt Reynolds and oh Margot Robbie was finally confirmed. So... this is happening. And I don't entirely know what to think. Stay tuned.
.
Who? Jason Adams When? 6:32 PM

I hope your next Beauty vs Beast should be between