So I Saw Hereditary... 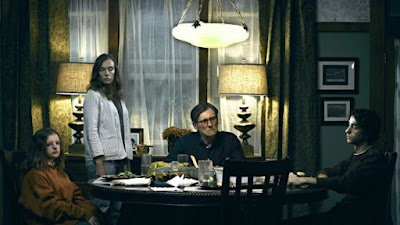 I've been crowing about my desperation to see Hereditary, the forthcoming horror film starring Toni Collette, ever since it premiered to big raves at Sundance. And if you follow me on Twitter (see below) or Instagram (also see below) then you know I finally saw the movie this past weekend. So why haven't I said anything about it here yet, or written the review that my tweet promised?

I guess I’ll try and write my review on Monday but quick no spoilers HEREDITARY is genuinely disturbing and fucked up in ways my fucked up brain had never even thought of before - just wow @HereditaryMovie @A24 pic.twitter.com/gGl2ivldVi
— Jason Adams (@JAMNPP) May 19, 2018

.
Thing is, I've decided to wait until I see it a second time to review it. Which isn't that long a wait - I am seeing it a second time next week. The film isn't out until June 8th anyway - when I do write up the movie I don't foresee being able to talk about it without spoilers, and you don't want to go into this movie spoiled. Don't watch the trailers, you guys! Cover your eyes and ears. Go in fresh as you can. And when the time comes believe me I will have a lot to say. A LOT.
.

.
For now I will just remind you that if you haven't yet you need to watch director Ari Aster's short film The Strange Thing About the Johnsons, which isn't thematically linked to Hereditary or anything but will show you the kind of fucked-up-ed-ness that Ari seems to like trafficking in. It's best to prepare yourself, folks. Plus this thing's just great in itself, watch:
.
.
Who? Jason Adams When? 11:28 AM