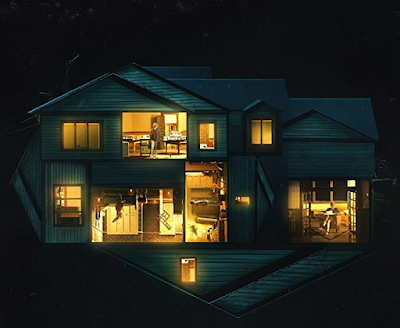 We have something to look forward to, everybody! Word broke out of Sundance about a new horror movie that Freaked Everybody The Fuck Out - I turned on Twitter yesterday afternoon and my timeline was a litany of "TERRIFYING!!!"'s all of a sudden and it turned out everybody had just seen a movie called Hereditary and people were running around sticking their heads in snow-banks and shitting their long-johns they'd gone so insane from it.
.

HEREDITARY isn't just the freakiest thing I've seen in ages, but by far the most emotionally upsetting. Never feels like a tease; every scare has a very cruel purpose. Toni Collette astonishes. Couldn't have asked for a more satisfying end to my #Sundance2018.
— Justin Chang (@JustinCChang) January 25, 2018

.
Last year people were raving about Get Out; three years ago it was The Witch - point being Sundance is good to Horror, and we should pay attention when one gets these kinds of raves up there in the mountains. That said while it only took Get Out a month to hit theaters after premiering at Sundance on the other hand The Witch took an entire year to hit theaters. Don't make me wait, dammit! I don't think Hereditary will take so long because it was already owned by A24 when it played the fest.
.

I only heard about this movie three hours ago and I'm already in the center of an inner emotional tumult, a tantrum, that I haven't seen it yet
— Jason Adams (@JAMNPP) January 25, 2018

.
I'm already intent on avoiding knowing too much about the film - the fact that it stars Toni Collette is plenty, beyond plenty, to sell me. I don't need or want to know too much about the plot. But here's another pair o' pluses from its IMDb page -- also in the cast is Gabriel Byrne + Ann "ANN DOWD!" Dowd! (DOWD!)

So I looked up the director yesterday, his name is Ari Aster and this is his first full-length feature. But he's gotten a lot of buzz for his short films in the past, and I kept seeing one title pop up - his 2011 short titled The Strange Thing About the Johnsons. And you know what? The Strange Thing About the Johnsons just happens to be uploaded onto YouTube. And so I watched it last night and... good grief, you guys. It is all manner of fucked up. Not in a gory way either - in an emotionally and thematically disturbing way. It wants to disturb you. I'm going to put it here but I don't want to hear a single whine from y'all - I warned you:
.
.
I warned you! I love the thought that Toni Collette might have watched that and was like, "Sign me up to work with the dude who made that!" Anyway Aster gave an interview to IndieWire about this short back when it came out, it got that much attention (I don't know how I missed it at the time) and explained himself pretty well, I thought, but the anger roiling in the comments over the film are where the real meat's at - this thing touched a nerve. And judging by the reactions to his new film it sounds like we might have a really interesting filmmaker coming our way. So stay tuned! I will surely be covering every bit of info on this one.
.
Who? Jason Adams When? 3:33 PM

That Johnsons film is some seriously fucked up shit!