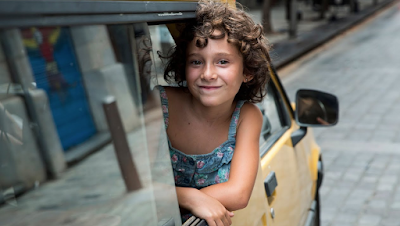 Every day childhood seems like more of a fantasy - a thing that happened to somebody else. It's been refined down to a few choice stories I've been telling myself about it for decades, polished and polished, smaller and smaller - I suppose it's like the process of compressing a diamond, and once it's the diamond it is nothing left but the truth of it; the essential element. Childhood becomes Childhood - a feeling, a phrase. A thing that can't hurt anymore on its own but is just a part of me now, like a square patch of foot.

Sometimes the movies stir that shit up though, the walls of the diamond expand and contract, pulse a bit, and Carla Simón's film Summer 1993 is one of those sorts of movies. (And it comes hot on the heels of last year's The Florida Project, which trafficked in similar sensations and moved me much the same.) Summer 1993 tells the story of Frida (Laia Artigas, giving a painfully always-present performance), a six-year-old girl who's been sent to the country to live with her uncle and aunt and their daughter after her own parents have both died. Frida's too young to really understand that though - this movie represents her coming to terms, in her own six-year-old sort of way. What a trip. 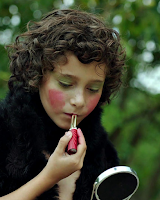 We watch the process right there on the ground with her - the camera always at her height, we explore this new landscape, make friends and lash out from minute to minute, cycling through rejection and terror and starry-eyed goofiness sometimes all within the space of a single minute.

The rhythms of childhood are gorgeously rendered by Simón - the languor of log hopping and starring at lady bugs and sudden nighttime, wolf sounds. Frida doesn't know what she's feeling or why but Simón always seems to, and we're trained to watch alongside, through deft edits and watchful eyes, as this resourceful smart girl finds her way through. And the stirring in our bellies of wanting to save and protect this little girl becomes something fierce, a force of nature swirling there in the Spanish hills. My god, this movie is alive.
.
Who? Jason Adams When? 11:56 AM

Beautifully written review. I'm not sure the movie could live up to this but I'm intrigued to find out.