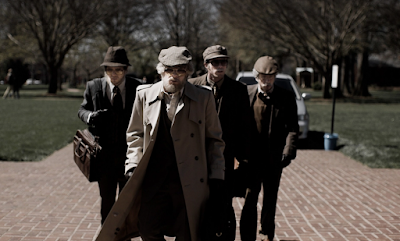 Have I become too hard of a cynic in my middle-age? I fear so - signs and symbols keep slapping me to and fro. Take for instance American Animals, the college heist movie out this weekend starring Evan Peters and Barry Keoghan as wannabe bad-asses a la Tarantino but a bit too John Hughes to make it quite there. I watched American Animals with perhaps too much of a side-eye because I didn't believe jack-shit I was watching.

I don't mean the actors were bad at selling the circumstances (they were fine) or that the directing was weak (it was fine) or anything like that - I mean I went into the film knowing nothing about the true-life story the film's based on and the harder the movie worked at reminding me of its "This is Based on a True Story" bonafides I kept watching it through Fargo-tinted "True Story" glasses. Like uh huh true story sure get a load of these guys nudge nudge. Sure there's a place called Transylvania University. (Whoops there is.) And sure a bunch of kids tried to rob the library of great big bird books. (Whoops they did.)

I spent so much misplaced mental energy watching the film thinking myself clever for poking holes in its fabrications, energy that actually ultimately proved me dumb as a box of hair, that I even convinced myself that the real-life criminals who are interviewed throughout the film were actors themselves - the film plays like an ongoing series of reenactments as these real folks lay out what happened, or what happened as they remember it anyway, and I thought I'd unlocked its secret key and that the movie was doubling down on its fakery. I was actually utterly convinced by the film's midpoint that Spencer Reinhard, the real-life person that Barry Keoghan's playing and who we see on screen, was being played by Barry's Dunkirk co-star Fionn Whitehead! 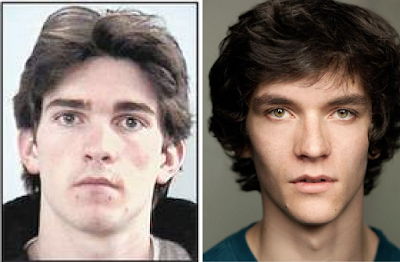 Whoops... it wasn't. All this makes it a hard film for me to really review because it turns out I watched a movie that this movie was not. I only realized I'd burrowed my brain into the wrong end of the basement when the rug wasn't pulled out by the film's credits - that I'd gone and made the film more byzantine than it ended up being. Since so much of the movie is explicitly about people deluding themselves into being people they aren't, talking about just that, I'd figured hey, what a trick!

What a trick that wasn't. And so... what a review this isn't? Lesson learned, then - don't rob fancy libraries, especially ones staffed by Ann Dowd (I mean for god's sake) and don't out-think movies before they've thought through their thoughts themselves. American Animals might ultimately be half-thought-through but it's not my job to then go and have an over-compensating fit thinking it all the way around the world and back for them. That's no good for nobody.
.
Who? Jason Adams When? 3:38 PM
Labels: Barry Keoghan, Evan Peters, Fionn Whitehead, reviews

FWIW,in 2007, four years after the events depicted in the movie, John Falk wrote an article about the plot called "Majoring In Crime" for Vanity Fair. It's available online.

It was subtitled “The untold story of the ‘Transy Book Heist’ is one part Ocean’s 11, one part Harold & Kumar: four Kentucky college kids who had millions to gain and nothing to lose.”

Since the entire article is effectively one long spoiler, a prospective viewer shouldn't read it until after seeing the film.