I Said Don't Make a Sound 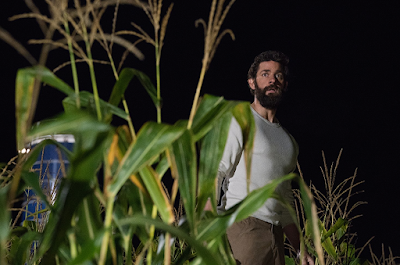 Eleven days and fifty-five years ago a horror film was released boasting some of the most revolutionary sound-design ever put on a movie screen. The film had no musical score whatsoever - instead the director had his composer design a sound-scape of nothing but the screaming of birds. That movie was called The Birds, its director was Alfred Hitchcock, and the composer was Bernard Hermann (along with the under-mentioned German composer Oskar Sala). Here's a fun point of reference -- watch a scene from The Birds with an orchestral score slapped on top of it:
.


.
I thought about The Birds a lot while watching this weekend's big box office smash A Quiet Place, starring John Krasinski and Emily Blunt as parents navigating an aural post-apocalypse, which I liked quite a bit but which I wish had had the courage of its convictions on this (dare I say it, yes I am going to say it) score. Marco Beltrami's (nearly unrelenting) music feels like a mistake to me. A missed opportunity. If somebody as mainstream as Hitchcock could do that 55 years ago why can't we get a movie with those kind of guts here in 2018?

Beltrami's music, which is perfectly fine on its own, offers too much of a release-valve for the audience - it sweeps in and tells us what to think every chance it can, and when it does drift off it alerts us to and triple underlines the silence, goosing us for the coming scare. It's just easy, woefully easy, in a film that could've been hard. Most of the Twitter conversation about the film this weekend has been about rude audiences loudly scarfing popcorn and slurping soda - it could have been worse had John Krasinski gone my route, and I wish he had.

I wish he had because this movie could've been great, but he settled for merely good. It is good - Krasinski shows a fine ability for setting up traps for his characters and slowly pulling out the floor or tightening the vise - there are ace sequences from start to finish. (The silo, oh god the silo.) And his cast is more than capable - Emily Blunt (with her face built for thirty simultaneous expressions at once) and Millicent Simmons most of all; I'd even go so far to say that the latter gives a better performance here than she did under Todd Haynes' direction in Wonderstruck.

The film is delightfully smart about twisting up its dramatic intentions - a family frayed by their inability to express their grief and pain to one another - with its horror ones, doing what the best horror always does: unearth the repressed, and make the symbolic literal. Movie Monsters, the good ones anyway, are always our emotional blockages unblocked - our ids unleashed - and these ones here, with their gigantic ears the better to hear your pain with, are a lovely addition to the canon. I just wish the movie would've listened to what they were telling us about themselves a little better. Shhhh....
.
Who? Jason Adams When? 12:17 PM

Such a great point about the score. It really would've been great if there wasn't one at all.

Saw this movie over the weekend and I really enjoyed it, but the long bouts of silence only amplified people's boorish theater behavior (crackling candy wrappers, coughing, chatting, etc)