"They know about us."

The sheer weight of that glance between Elio's parents, right after they've found out that Oliver's called to basically break their son's heart into a billion little pieces all over again, knocks the wind out of me every time I see Call Me By Your Name. As if I need the wind knocked out of me another time by that point in the film! I already can't breathe, dammit. 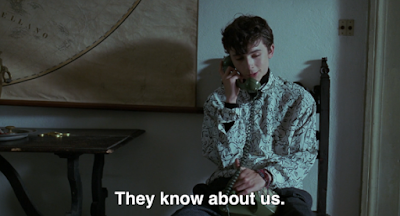 But the movie persists, and so should we. Watching the movie, over and over, I mean. I went my 18th time last night - yes even though it's been on blu-ray for two long weeks (say it like Annella) the film's still on the big screen here in New York, proving to me one more time that New York is the place to be.

Finding out I went an 18th time probably doesn't surprise you, but you wanna hear something actually surprising? I haven't watched the blu-ray one time yet. I did watch the (scant) extras on the disc, save the commentary. But as long as I can still see the film in the theater, I'm going to go see it in the theater when the mood strikes me. It's a privilege to have the option, one I'm not going to be ignoring as long as I'm able.

And honestly the second the opening credits come up a smile spreads across my face and I'm lost  anew, every time. I try to keep a mental checklist of "Things I should write about that I haven't written about yet" (such things do actually still exist, believe it or not) but I get so captivated by the movie still that I've usually forgotten the specifics of those thoughts by the time it's over, since they are all, at this point, littler things. Things like...

... the strange and surprising angles that Luca shoots Timothée and Armie at times - "they're all curved, sometimes impossibly curved, and so nonchalant... hence their ageless ambiguity, as if they're daring you to desire them." Timothée posing above actually takes place simultaneously with his father speaking those lines and it always shocks me, the effortless (one might say "nonchalant") way that Timmy transforms his body in one quick shift from subject (staring straight at us) to demure object (curling up fetal like). But then the shifting power balances in the film...
.

Spent some time diagramming Elio & Oliver's swap from left to right and vice versa across the run of CALL ME BY YOUR NAME last night - the shifting power dynamics rendered visually pic.twitter.com/KYuv6RokZi
— Jason Adams (@JAMNPP) March 30, 2018

.
... are one of its most striking - and pretty specifically homosexual, I should add! - aspects. For all of Luca's talk of the universality of this story it still speaks plainly, furiously at times, to what it means for one man to fall in love with another man, and how unsettling that can be. How it requires a letting-go inside of us of the behaviors we've been taught; a shift in our inner balance. Something like the swap from "I thought you should know"... 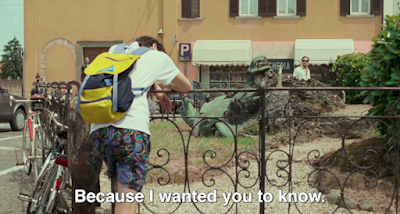 ...  to "I wanted you to know." There is of course power at play in male-female relationships, but it's a different dynamic usually (I'm speaking in generalities here, obviously). It wasn't that I found it uneasy to be a submissive or passive partner when the time came - it was more just a shock that that was even an option. It's not what little boys, even in the most open-minded of households, are generally taught about what it means to be "male." And we see Elio dealing with that same realization over the course of the film. In his interactions with Marzia we see...

... him much more confident and brash; he knows the role he is supposed to be playing with her. We never see him more aroused by her then when she explicitly states how much power he has over her. ("You're so hard!") But with Oliver Elio is unsure and awkward about what to do; who he even is. His sense of self sputters. But funny enough he finds himself... 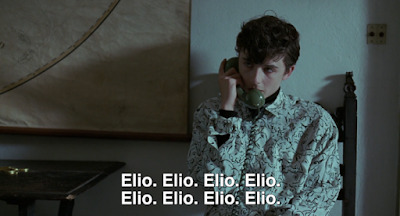 When you have a chance to watch the commentary, let us know what you think of the striking bit that Timmy says, about how, when they were filming outside in the hot sun, Armie would let Timmy stand on his feet between takes so that he wouldn’t blister his soles! I mean, Timmy’s feet on top of Armie’s. It’s lovely that they got so close, but isn’t that a bit intimate for two straight men? (A real question. I no longer know!) Timmy’s comment occurs during the long piano scene.

I love that cut from Sammy Perlman’s statue talk to Elio’s angled body. Some of the backlash against the film seems to be about people forgetting how surprised and moved they were when they first saw the film and how subtly and delicately composed the film is: the stuff about statues is captivating on screen but can sound artsy and dull when one mentions it to someone. I know because I brought it up to someone who, it turned out, forgot that there were statues at all!

I'm so glad you keep writing about this film and being honest about its enduring lure (I don't want to "get over it" or move on, I want it in my life, I'm grateful its in my life). And you put into words some of the same emotions I feel with much more eloquence. Just, really grateful.

I think the heat death of the universe will come before you run out of things to write about this movie, and I am totally here for it.

Love these comments. No one writes more eloquently about CMBYN than you. You have enriched my experience of the film so much. Any time you post I’ll read and reread.

It was never a question to me that Elio's parents knew. Of course they knew! Especially Annella! Who or what could hide from Amira Casar's penetrating gaze. Fortunately for Elio and Oliver, she's pure love and benevolence. And how right you are about the glance she and the professor exchange after Oliver breaks the news; their hearts breaking along with their son's. I still don't understand how anyone can have such an experience as Oliver did with Elio, then blithely announce over the phone that he is going to take vows with someone else, then accept congratulations without bothering to explain or aussuage. I'd call it cruelty if not for Oliver's probable closeted life stateside, and a resulting well-developed ability to compartmentalize: his love affair with Elio this perfect memory to be brought to mind for occasional rumination. Oh Oliver! How could you?

I love how much you love this movie. Quick question. Have you seen the CMBYB crack videos on YouTube? I’m wondering if you’re familiar with that side of fandom. I’ve seen those types of videos for other tv shows/movies and recently came across some for this movie. Would love to know what you think.

This is such a good piece. Your a very talented writer. You do a really great job of articulating your thoughts about the movie and its themes. I appreciate how it helps me see the movie in a whole new light and actually makes me love the movie more than it already did.