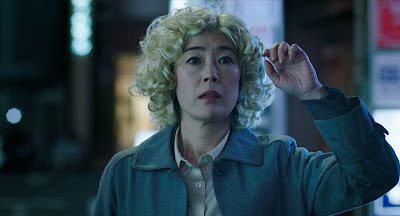 When I used to go to ComicCon here in New York I would always see somebody waving around a "FREE HUGS" sign and an electric shudder would run along the entire length of my body. I'm not prone to want to touch strangers; I usually need to work my way up to a firm handshake, much less the enveloping of extremities. That said, I get it - a hug can be a lovely thing, a life-changing thing. Human touch is a scientifically proven inoculation against the bad stuff, like sunshine itself.

So imagine what a hug from all six foot three inches of Josh Hartnett could do for you! It's like a booster shot straight to the heart. (Would a booster shot straight to the heart kill you? Well you know what I mean. A metaphorical booster shot.) That's what happens to Setsuko (an absolutely unforgettable Shinobu Terajima) in the film Oh Lucy! - her niece swindles her into taking an English class and she walks in the door and there's Josh Hartnett, tall and shining, communicating through smiles and hugs. 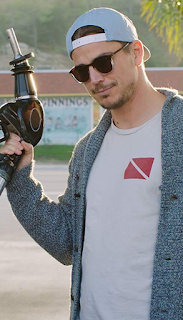 And that's that! A beast is born. Insatiably hug-hungry for life, Setsuko's quest is lain before her from that moment on - she will swerve through any obstacle, thousands of miles and blood relations, to get into that sweet warm embrace once more. As touch-averse as I might be I have still never felt a hero's journey deeper in my bones than I did this one right here.

It helps that writer-director Atsuko Hirayanagi (this is her first feature, and she is really somebody to watch, you guys) saturates Setsuko's Tokyo from the very first frame in a comically sterile sadness - Oh Lucy! is balancing about five different tones at once as Setsuko, in a silly blond wig, dodges suicides, and with darkly funny aplomb. Movies like Oh Lucy! are mini-miracles - one of a kind character studies that follow their own inclinations where ever they might go; this one wanders the globe in good hands. Good big hands attached to long firm arms. Squeeze it tight and never ever let it go.
.
Who? Jason Adams When? 12:24 PM