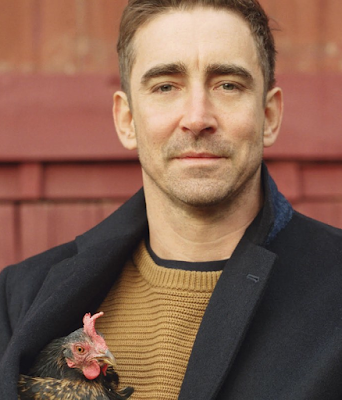 Last week we covered Lee Pace's "coming out" of sorts in an interview with W Magazine and it stoked some reactions, up to and including from yours truly. Most of us were just irritated at Lee's tone, which read as hostile in the moment. So I'll happily share his three-tweet response to the brouhaha today, hoping we can put this all behind us, present company included, and focus on what really matters - getting Netflix to green-light ten more seasons of Pushing Daisies. Here's what Lee had to say for himself:

"In a recent phone interview, I was asked questions that I wasn’t expecting and found myself momentarily at a loss for the right words. My privacy is important to me, so I protect it. When interviewed by the media, I keep the focus on my work. As a member of the queer community, I understand the importance of living openly, being counted, and happily owning who I am. That’s how I’ve always lived my life, just as it's been important to me to portray queer characters with dignity for my entire career: A Soldier's Girl (Showtime. 2003). The Normal Heart (Broadway. 2011). Halt and Catch Fire (AMC. 2014-2017). Angels in America. (Broadway. NOW.) Onward, with Pride."

Now can he tell us what was up with him and Armitage?

I have a problem with our celebrity obsession. I do not need Mr. Pace or indeed any other actor to validate my sexuality, politics or any thing else. Outside of what’s on the screen they have no more importantace or insight than anyone else. Why are we asking where he sticks his dick in the first place? Just because he’s pretty.

No, he was asked because he specifically said he believes gay actors should play gay roles. He's currently playing a gay role. Therefore, the next logical question is, "are you gay?" And if he's "living openly," this shouldn't have been a problem.

The problem is that, although Lee Pace is entitled to privacy, he's not living in a court of law. He can't plead the Fifth: The court of public opinion can incriminate him based on his silences. There's no way to avoid wondering whether his reticence to discuss his sexuality is based on principle or shame, and no way for LGBT people not to feel hurt by that shame. That doesn't mean Lee Pace need be forced to come out, but his silence has consequences that must be considered.