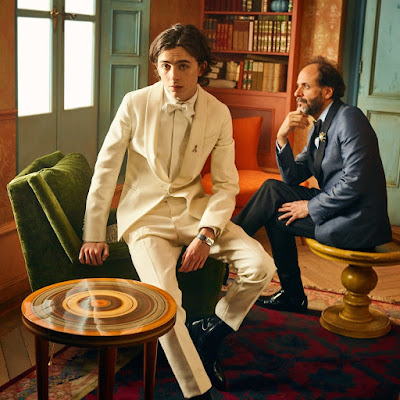 I do believe that this is the first time I have ever used this series for a picture that's not actually from a movie, but I think you'll grant me this exception. Vanity Fair posted this shot on their Instagram last night of Call Me By Your Namers Timothée Chalamet & director Luca Guadagnino striking tuxedo-clad poses in front of some shelves and you'd better believe that I have already had this picture sent off to the printers to have bedsheets made.

ETA oh wait, I should add this! On the red carpet last night Luca talked about the CMBYN sequel some more and he sounds more serious than ever, you guys! Via USA Today:

"I'm already conceiving the story with André Aciman, and it's gonna happen five or six years afterwards... It's gonna be a new movie, a different tone." The director also revealed the sequel will star Armie Hammer and Timothée Chalamet but will have a different backdrop. "They're gonna go around the world," he said."

THERE'S DEFINITELY GOING TO BE A SEQUEL??!?!? I HAVE OFFICIALLY SHAT MY PANTS FROM JOY.

I love how open Luca is about the creation of all his projects. It’s publicity, but it’s the kind I like. I’m excited that he and Aciman are so far along and not tying themselves (it sounds like) to the book too much. I’m also starting to get excited about “Suspiria.” The praise seems more genuine than the usual advance word from interested parties. Could we have a great horror film coming this fall? (Different subject: did you read Lee Pace’s Twitter comments? Like you, I was irritated, but now I’m willing to forgive.)

I'm excited about the possibility of a sequel, but I'm also quite apprehensive. A large part of what makes this film so impactful and memorable is the idyllic, almost fantasy-like setting, and I wonder if the characters will be able to sustain entry into the "real" world. I'm also curious about just what Luca and Andre will want to say about these characters, and especially about their prospects at love. There's a lot about their relationship that the film and the novel leave open to our interpretation, but sequels would likely mean that they have to make decisions about who these characters are and the nature of their relationship that likely won't please all fans.