Elio & Oliver Are Coming From Inside the House 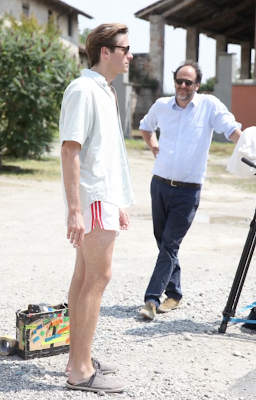 I'm having a difficult time focusing here at my office now that I've gotten confirmation that the blu-ray of Call Me By Your Name has been delivered to my home - it's just sitting there, being ignored! What if it thinks I don't love it? What if its fragile tender little heart breaks of loneliness???

I'll be there soon, mon amour!

I wish I had more to write on such an important day but I just checked and it's been just a couple days short of AN ENTIRE MONTH since I last saw the film - easily the biggest break between screenings since I saw the movie for the first time in October. Fifteen screenings over the span of five months works out to a lot to say! That said it's not as if I don't recall what happens or anything...

I could probably whip up a piece if I were so inclined but I'm allowing myself a little mental break. We'll see if a once-over of the blu-ray's Special Features tonight inspire more from me later this week but for now check out all we've written in the past, and share any and all thoughts you've got in the comments!

I have to wait to watch it again when I don't work the next day. My boss ordered me too, because I became an introspective mess the first time I saw it. Every clip during the endless awards season put a lump in my throat. Film that that has that effect is exceedingly rare. Cannot wait to experience this perfection again.

Amazon delayed my delivery by a day because there was LESS THAN AN INCH OF SNOW on the ground here in Virginia. I should be getting it today.

Chris! You should SUE!! That is NO excuse!!

I'm ready to see this a third time, and the revelation for ME is not only Timothée Chalamet who should have been given an Academy Award, but also Armie Hammer who perhaps benefited from my low expectations. He wouldn't have been my choice to play Oliver (too old, too wooden) but after two viewings I found him to be surprisingly good in this. His Oliver is attractive, appealing and a tender lover to Elio, and by the time the latter had his little breakdown collapsing into Oliver's arms moaning "I don't want you to go!", I had to agree. It's_a cliché to say, but the last time I liked Armie Hammer in a movie was "The Social Network," (and he perhaps displayed a flair for comedy in "Man from U.N.C.L.E.") But in "Call Me By Your Name," he takes a big step forward, and my reservations about him dissipated completely.

Dear followers of MNPP: Please, please, please read the book! It will add so much more to your experience and also leaves the door wide open for the now talked about sequel.
Yes, it is quite a bit more graphic than the film but also allows you see what a challenge the screenplay was for the Oscar deserving Mr Ivory. This is because so much is taking place in Elio's head in the book. How to translate that?
I'm reading it for the third time as I hurried through the first two before seeing this beautiful and bitter-sweet film.
I've come away from both the book and the film not crushing on the talented and sexy actors but on the universally relatable emotions and memories of a true love's intricacies.
So beautifully moving. So needed.