I've got a pair of new trailers to share with y'all today and I am not above (hahahaha) using naked men in the shower to stop you in your tracks to watch them. Nope. Not above that in the slightest. First up we've got the trailer for Rainer Werner Fassbinder's newly remastered 1972 miniseries Eight Hours Don't Make a Day, which is premiering at the Film Forum here in New York tomorrow. Watch:
.


.
See our previous posts on Eight Hours right here. That trailer only gives you a couple of quick glimpses of my working-class crush from the series named Wolfgang Zerlett... 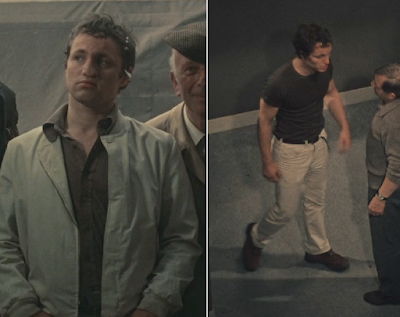 ... but their glimpses that get the crush across, I think. I don't know how RWF found these guys - they all look the same but what a look. Anyway speaking of atypical beefcake onto our #2 trailer...

... which is for a movie called Sun Dogs, starring the always surprisingly appealing Michael Angarano as "a young man determined to be a military hero [who] ends up on a misguided adventure." The trailer makes his adventure look very misguided! Watch:
.
.
It co-stars newly-minted Oscar lady Allison Janney as his momma, and it hits Netflix on April 6th. I never really paid Angarano much mind until that filthy scene he did in that movie called The Brass Teapot a couple of years back and now I always take notice. So, you know, take notice, Young Actors - get yourselves butt whipped by Juno Temple in half-off tighty-whities and you'll make fans for life.