The Fantagraphics “Studio Edition” of Charles Burns’ masterpiece BLACK HOLE is so, so big and so, so, sooooo beautiful #charlesburns #art #blackhole @fantagraphics
A post shared by Jason Adams (@jasonaadams) on Jan 11, 2018 at 7:38pm PST

.
My Xmas present to myself this year was Fantagraphics great big (and I do mean GREAT BIG) fancy-pants "Studio Edition" of what is quite probably my favorite book, Charles Burns' graphic novel Black Hole, as seen above, blocking out both the sun and your trusty blogger. Okay yes it was a series of comics before it was turned into a "book" but whatever, those definitions don't matter now right? 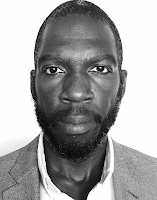 Anyway we've been following the saga of getting Black Hole - which tells the slow and strange nightmarish tale of a sexually transmitted plague of sorts working its way across a group of teenagers in Small Town America - turned into a movie for a decade at this point at least, but there's new news today -- somebody is trying again! No it's not David Fincher anymore - THR is reporting that Dope director Rick Famuyiwa is going to take a stab at it.

He is a fascinating choice and for unexpected reasons - Famuyiwa is a black film-maker, and all of his projects have starred basically entirely black casts. He also made Brown Sugar and The Wood and worked on the TV show The Chi. Black Hole is, off the top of my head, lily white? I can't recall if there are any black characters in it, but the thing is... it is literally black and white; HARD black and white. These characters don't HAVE to be caucasian: 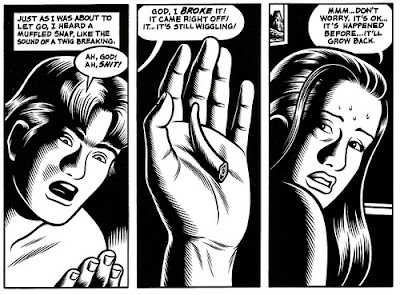 I'd been reading them way but there's nothing saying we have to read their skin-tones that way. But I could be making a false assumption here - maybe Famuyiwa intends to make this his white people movie. Or maybe he'll mix the cast. Hell they could animate the thing a la Burns' section in the film 2007 horror cartoon Fear(s) of the Dark. THR doesn't have any info on his plans or quotes from the film-maker.  Whatever he does I love he's got me looking at Burns in a new way, and we'll keep our eyes peeled for more info...
.
Who? Jason Adams When? 11:51 AM