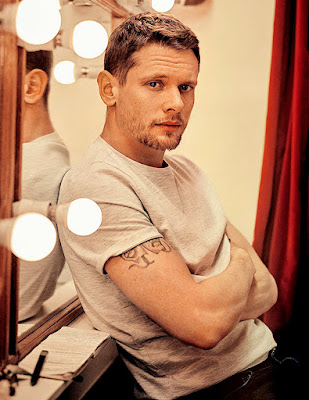 Tonight I'm seeing the National Theatre Live screening of last year's London-based Cat on a Hot Tin Roof production that starred Sienna Miller and Jack O'Connell - we've posted some pictures of Jack in the show previously, see here and here and here, which tell the entire story of why we're going out of our way to see this. Anyway my enthusiasm's got me ruminating on Bricks of yesteryear...

... and while it wouldn't be fair to pit anybody against Paul Newman's classic turn in the 1958 film there are other options to opt! Mainly the two that sprung to mind were Jason Patric in the 2003 stage version opposite Ashley Judd, and Benjamin Walker's just a couple of years back opposite Scarlett Johansson. So I ask you... 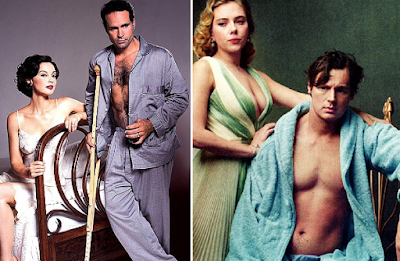 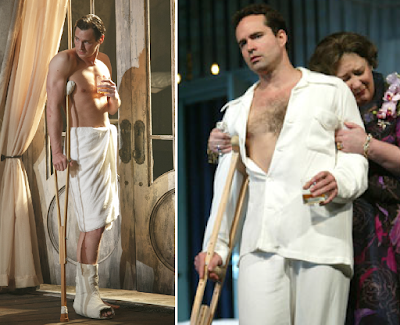 My choice is Brendan Fraser who was smashing when I saw him in this role in London in the aughts.

Normally I'd be all about chest hair, too. But hunky Walker on crutches just does it for me.

I saw “Cat on a Hot Tin Roof” as well last night. Hope you’ll write about it. (Nice, very prolonged butt shots, but kept hoping for a better frontal shot.) O’Connell, I thought, was best in show, very inner-tormented and then explosive, sort of like Heath in Brokeback. He’s someone I’ll now be looking for. The only thing that threw me out of the play was his tattoo with the drama masks that said “Jack the Lad.” Cover that thing up if you’re not playing an actor named Jack, dummy! I also thought updating the play to the present (cellphones) was a mistake, since the homophobic sexual repression was way 1950s. All in all, uneven but still powerful. I hadn’t been to one of these televised plays in ages, but was really glad I went.

John beat me to it. "Chest hair" for the win!