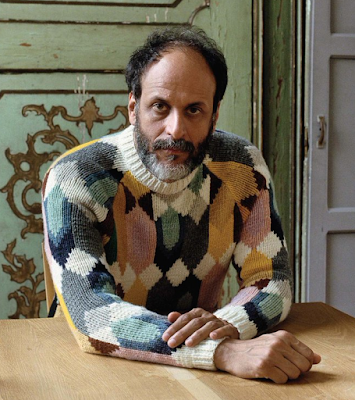 I knew that Luca Guadagnino and Timothee Chalamet were going to do a Q&A on Facebook Live yesterday, but I figured it was just going to be the same peach-fucking stories I've heard a dozen times so I didn't bother to watch it... and so I missed the news - and I'm angry at all of you for not telling me! -- that Luca said his Suspiria remake will be out in October! If you had forced me at gunpoint to guess when his Suspiria remake would be out I would probably have guessed October (and I also probably would have asked you not to shoot me while I was, you know, at it) so I am not surprised, but I have still be waiting for this news to be news all the same. So draw a big bloody red square around that entire month - it's getting Suspiriaized! Here's the entire Q&A if you like; I still haven't watched it so tell me if there's anything else interesting said, like Timmy talking at length about how My New Plaid Pants is his favorite website or whatever....
.

I fear a time when Call Me by Your Name is no longer the daily topic and my comment disappears from Hot Topics on the sidebar. Come on, sequel! I need my CMBYN fix for years to come!

LOL I don't know if I'll ever be able to take Dancing Armie out of the sidebar, Adam! You might be safe for a long time. It still brings me tremendous joy :)

I love the way Timmy keeps Armie in the conversation. I miss their no holding back PR tour in support of CMBYN. Their joy in each other--and the way Armie seemed so much more opened up--were great to watch.

Wow, it’s news to me that there’s a deleted scene on the Blu-Ray of Elio’s parents in their bedroom overhearing the sounds of Elio and Oliver making love.

Another brilliant thing that I learned from this Q and A was that Timothée was the one who chose to look into the camera at the very end of the film—that beautiful intimate glance. It makes me love his performance even more, if that’s possible, and also the genius of Luca for being so open to the moment and to his actors. He worked on this film for almost a decade, and yet he’s the opposite of a director who storyboards the life out of a film. The generosity they show to each other may be the most lasting insight about art (and life) that I’ll take from my love of Call Me by Your Name.