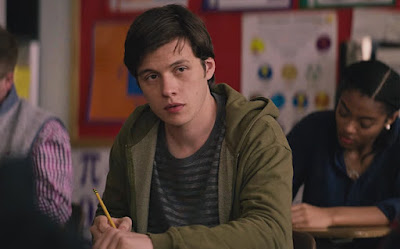 There's been a lot of talk lately about "What happened to the Rom-coms?" Even just a decade ago the genre was still offering up at least one or two annual sacrifices to the Volcano God of Meet-Cutes. But then somebody pushed Kate Hudson off a cliff, and Sarah Jessica Parker behind her, and Jennifer Aniston behind her, and on and on, and as hard as the adorable smirking white ladies tried to hold onto each other's dangling Louboutins the self-tanner was too slick and down down down they tumbled, dragging all the McFillInTheBlanks with them. (Here Patrick Dempsey was born, and here he died - twas only a moment for you, you took no notice.)

There is delight to be had in the formula of these movies. When it's right it sings. The aforementioned Meet Cute, the tangle of spiky circumstances and obstacles that get in the lovers way, and the triumphant kissy-kissy on the surface of the Moon or Mars or the Empire State Building at the end - this is a most holy quest, one that feeds a ravenous emotional monster flailing around in our bellies. We need it like hamburgers.

But Rom-coms forgot us. They forgot that beast stews in our very real, human juices - if you prick us do we not bleed, Garry Marshall? They got so hung up on their impossible genre trappings, each story taking us further and farther removed from recognizable human behavior - it's not that we need realism from these stories. We want Fantasy. But those obstacles separating the lovers, they need to remain relatable - they can't function only as the MacGuffins raining down upon a deranged nonsense-scape, living and breathing only through their own self-imposed psycho rules. The hoops these movies had their characters jumping through to get to one another were on fire, twenty feet apart, over beds of brain-damaged alligators that hadn't eaten in months. It was romance by way of Bond Villain.

And we wonder why men and women have been staring each other down awkwardly across the sofa cushions lately. Listen. There are surely still perfectly good ways to tell love stories about a white straight man and a white straight woman falling in love. They do it every day in the real world, and it totally works. You get the right stars with the right chemistry and that movie will sing just by showing them bat their pretty little eyelashes at each other. (Yes I am totally looking at you, Ryan Gosling and Emma Stone.)

But perhaps, as we take this breath, this moment, it might be something if we try to work our way through this jungle we've lost ourselves in by forging different paths. And that's where something like The Big Sick came in last year, enlivening the genre with a true story of cross-cultural coma romance - how about instead of the story of a magazine editor who has it all finding ways to choose between three different but entirely identical men who just won't settle down we instead put ourselves in the shoes of the millions and millions of people whose parents want them to marry somebody who looks just like them and worships (or doesn't) just like them? Novel, I know. You'd think it insane, and yet somehow it clicked. 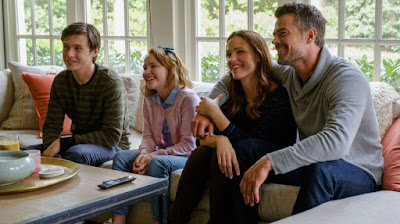 And now here we have Love, Simon. It stars Jennifer Garner and Josh Duhamel as a married couple who oh wait this story isn't about the stars of 13 Going on 30 and Life As We Know It meeting cute at an artisanal coffee klatsch at all -- this story is about their gay son, and it's about him falling in love.

Like The Big Sick before it, Love Simon's not at all afraid of the genre trappings - it could really be set down as a sequel to Life As We Know It + 13 Going on 30 and be a part of their car-commercial world. The big suburban houses stacked with Martha Stewart Livings, the just colorful enough cast of supporting characters, the flashy bee-boppy soundtrack of Starbucks Playlist friendly tunes. It just shows that those trappings needed more than a fresh coat of paint slapped over them - they needed some reworking under the hood.

Love, Simon opens with Simon (Nick Robinson) monologuing about his own perfectly appointed normalcy despite his, you know, Great Big Gay Secret, and in a total flip of my expectations the film doesn't spend its runtime telling him to embrace otherness - no instead... Normal comes to him instead. The world of the movie, aka the world of the Rom-com itself, opens itself up, making space for Simon and all the Simons in the audience.

Okay so nobody's ever going to mistake director Greg Berlanti for Greg Araki - Love Simon's queerness isn't beaming in from a gaudy outer space sex-planet with a high body count. It ain't keeping anybody or anywhere weird. Simon tries on a tighter t-shirt one time, but nahh. Not for him.

And yet the part of me that wanted to scoff and side-eye this movie's puppy-eyed mainstream sincerity at times was at times shoved right out of the way by this sort of Alternate Universe Me - a me that grew up with Jennifer Garner and Josh Duhamel as my parents in a great big Martha Stewart appointed house where my friends and I drove to get coffee every morning before school and wait just a second isn't this what these movies have been doing for generations of Straight People? Is that what this feeling is? Is this... the thing... called Wish Fulfillment? 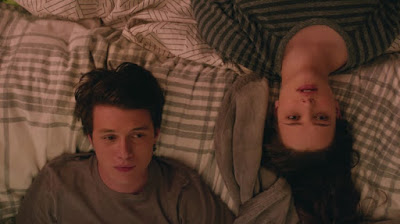 This Alternate Universe Me, he went through a lot of the same things the normal me went through. Both of our female best friends in High School were in love with us, which we purposefully, at times cruelly, ignored. Coming out to our families at Christmastime, hooray, that was an experience. That feeling of a small town, of the graduation countdown, the narrative possibilites of our New College Selves erasing our previous selves... me and this other me found plenty in common. And yet this simpler me, this Simple Simon, he sorta sorted through the real life chaos that I remember. He took my true story, my own, and he shined it up a little bit. He rubbed his elbow in, and he made a movie out of it.

And a sweet, funny movie, at that. Where The Big Sick was smart about turning Kumail Nanjiani's feeling of "otherness" in that romance into a literal desertion, an isolation from his object of affection via her coma - he was stranded among a sea of gawkers left to scramble and explain his damn self over and over again - Love, Simon plays a similar smart trick, upending the genre's trappings to its benefit and in a way that speaks directly to the heart of its specific gay love story. Love, Simon is a romance of secrets.

The conceit of the film is that Simon and "Blue," as he's called for most of the film, find each other via an anonymous online confessional board. They bond with each other anonymously, hiding their true selves away beneath pseudonyms. It's a very queer idea of romance - entirely entangled with secrets and lies and the cover-up. The closet. The film becomes about the their quest to push aside and through all of that - they find strength through each other, daring the other further and further out of their closets. But Love, Simon also knows that vacuums open up in the wake of these revelations, that those lies have seeped poison into our lives, and that process - even for all the pretty people we're watching do it in finely appointed houses - is never neat. It's like a murder mystery, but that's no lead-pipe in Professor Plum's hand...

Anyway Love Simon, in its own way and through its own means, makes some sense of it. It rubs its elbow in, and shines up the chaos just that little bit, bless its pretty, well-meaning heart. And in so doing, it shines up the rom-com too - the genre's not dead, you guys. It just needs a little love and affection, a tender little knock around under the hood now and again to sort out its priorities. May we be blessed with more love stories like Love Simon.
.

I can't even with this review. As if I wasn't already mildly excited for this movie, now I'm chomping at the bit.

Call me crazy, but this may even be a better-written review than your Call Me By Your Name review, and THAT is a TALL ORDER.

Josh Duhamel is playing the dad? God that makes me feel old.

Yay! I'm so glad you enjoyed it. Have you read the book? It's amazing! I'm so nervous about seeing "Love, Simon" because I already know that I'm gonna hate all the changes, kind of like with "Call Me By Your Name". I've yet to see it (shame-shame, I know) but I'm dreading whenever I finally do because I really feel like I'm just not gonna enjoy it. That's how I feel with "Love, Simon"-I'm terrified I'm gonna hate it. I know the books are still there to be read but very solid adaptations can exist and so it's incredibly frustrating when they don't.

Side Note: I know I'm annoyingly bitching, but one thing I'm definitely NOT complaining about is the fact that we FINALLY have a mainstream, major studio-backed teen movie with a gay lead. That is SO fucking awesome!!!!! And faithful adaptation or not, I truly couldn't be happier that "Love, Simon" exists. It's about damn time!!! :)

I love your writing. It helps that we have similar tastes in movies!
This is my 2 cents that I posted on Facebook:
I enjoyed this movie very much. It's basically a John Hughes flick with a gay slant... and works. All the conflicts are real. Never saccharine. Plus... there's ongoing rehearsals for the high school production of 'Cabaret!'
I think older gays may be cynical towards it for two reasons:
It is a teen themed movie. At least the adults don’t act like buffoons (one exception). But, it’s the young cast that carries it.
As with many if the contemporary gay movies, there is drama, real drama, but not the drama some seem to need. Nobody is sick, no mention of AIDS, nobody gets beaten or murdered. The gays are not victimized like they have been for decades.
It’s a sweet teen coming out/coming of age movie that I wish I had seen when I was 15.

I've already seen it twice and am MADLY in love with it. Such a warm, feel good movie. Please keep posting about it. We need it to make gazillions of dollars so the main studios will support gay films.