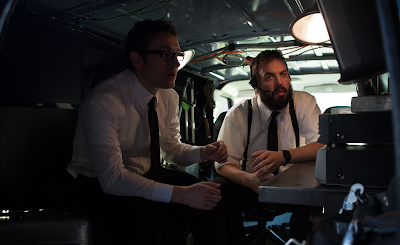 A happy 41 to director James Wan today! I still haven't seen the fourth Insidious movie; have any of you guys? I will at some point but the franchise really isn't the same without Patrick Wilson wearing DILF shorts in it. Speaking of PW, did you guys see this...
.

.
Yes that is Patrick giving us his best Freddie Mercury, which turns out is actually a shockingly great Freddie Mercury. I suppose I shouldn't be shocked since he was trained via Broadway and all, it's just been such a long time since he reminded us of those bonafides (and also he is so different from Mercury physically). Anyway could somebody put him in another damn musical already? I don't even like musicals, but I  do like Patrick Wilson strutting around in tight white pants so it all evens out.

In other James Wan news last week whispers leaked out of some early preview screenings of Aquaman that he might've made a great movie from that most unexpected of superheroes - I haaated how they managed the character in Justice League, with all the phony baloney Ultra Masc tough-guy posturing so I hope they tone that down. You've got Jason Momoa standing there with pecs half a mile wide - you don't need to convince us he's a man. We get it. Just be fun. Show him turning sea-horses into scooters and shit. That's what we're there for.

Well that plus the half-mile-wide pecs. Keep those.
.
Who? Jason Adams When? 1:48 PM