Bite Me Off A Piece of That

How did they get footage of me realizing that I have to wait until October 5th to see Tom Hardy playing Venom? Sneaky, sneaky Sony. Yes it's true, I can finally let you all know, Tom Hardy is playing me in a bio-pic of my life, called Venom. Okay I don't really even know where I'm going with this... 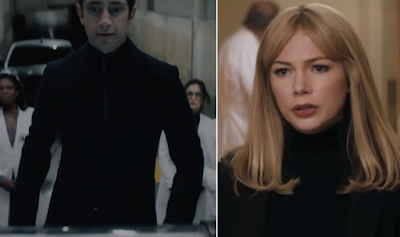 ... if this here teaser trailer gave us a proper look at Riz Ahmed as the bad guy (although isn't Venom himself bad?) or if they gave us Michelle Williams doing anything more than "Concerned Girlfriend In A Marvel Superhero Movie" Face... then maybe I could give you more of a post. Alas.  (And why is everyone wearing so much black?) They do focus on Tom's lips though, which isn't ever a bad idea!

They're the real selling point!
Here's the trailer:
.
.
If you want exciting things worth your time I'd recommend following both Tom himself on Instagram (he uses it a lot!) as well as the official Venom Instagram account, which ain't too shabby either. Here's a picture that Tom posted when he wrapped filming the movie a couple of weeks ago: 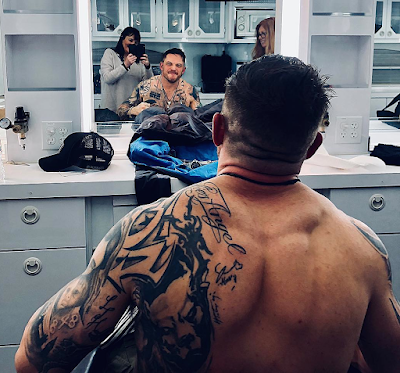 See, THAT is the content we are looking for.
In summation...
.

Aw, Michelle. If anyone was safe from the "boring superhero girlfriend" role, I wouldn't thought it was you. I know all those Kelly Reichardt movies don't really pay the bills but surely "Greatest Showman" helped make up for that.

Bulge Alert in that shot, too!