Like a mathematical formula sprung out of the dirt, something between a circus tent and the Pythagorean theorem, the scientists return to their plastic white cave set in the center of a field in the middle of no place. All around them the Natural World burns bright sharp greens, ombre sunsets, but inside their little sterile laboratory they are measured grays. They seem wholly unnatural there.

The mystery of just what our heroes Keith (William Jackson Harper) and Jessica (Rebecca Henderson) are doing there, sore thumbs out in a strange place, astronauts on Earth, is what occupies the thrust of Philip Gelatt's film They Remain - we watch them measure and quantify and chat, we watch Keith wander the woods placing cameras about, but we have no idea what they're looking for, or at.

But slowly a hallucinatory weirdness creeps in. First through their subconscious - their dreams and drunken imaginings. Stories of sex cults and holes in the ground seep into conversation - they unearth piles of bones, clumps of bees, monster bits, and the door to their pristine white science-space gets left open and the bugs start climbing in. Nature reclaims what is its every time.

They Remain is a strange and slow little creation, an insect pinned to graph paper, last gasps - if I was going to compare it to anything I'd say it brought to mind Ben Wheatley's similarly isolated and strange A Field in England? Similarly if you've got the patience They Remain will reward it - Harper and Henderson have a fine rapport, which is vital since the film is basically nothing but that, disintegrating and mutating over the course of two hours.

And the cinematography from Sean Kirby (who made the documentary Zoo such an unforgettable experience back in 2007) is often absolutely breathtaking - figures burnished in relentless tree-scapes cross-cut with eyelashes in extreme close-up; pretty pretty somethings abound. I wish I had seen it on a big screen myself!

They Remain is opening in NYC this weekend,
and in L.A. the week after. Here's the trailer:
.
.
Oh and I seriously love this movie's poster: 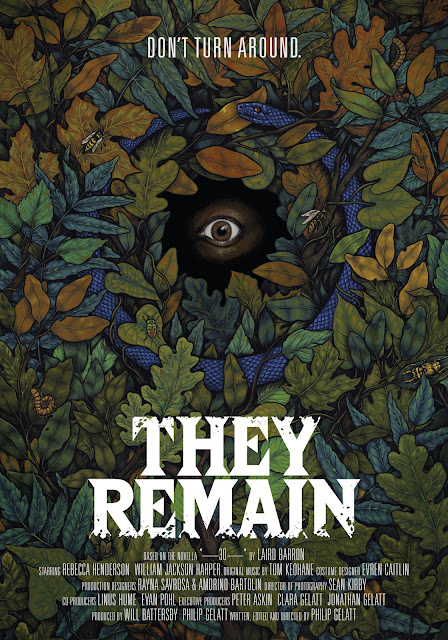 I'd see this just for William Jackson Harper alone. He's phenomenal as "Chidi Anagonye" one of the leads in "The Good Place", which is the first American sitcom I've loved since "Arrested Development". The full first season's on Netflix. Really worth checking out.