The Moment I Fell For... Allison Janney

I fell in love with Allison Janney the second I saw her in Ang Lee's 1997 masterpiece The Ice Storm. The black-and-white dress, the bowl of keys - iconic. If I saw someone dressed as her for Halloween I would marry them on the spot. Before The Ice Storm she'd mostly just done small roles in things like The Cowboy Way (a movie only remembered today, and rightly so, for the scene where Woody Harrelson covers up his junk with a cowboy hat) but for some reason she already felt like someone you knew, ya know? Soon enough came The West Wing (which I have never seen a single episode of, by the way) and she'd marched her way into all of our hearts. But every time I see her I think of the key party....

And right after the key party i think of Drop Dead Gorgeous. 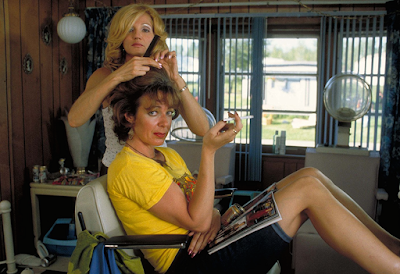 What do you first think of when you see Allison Janney? 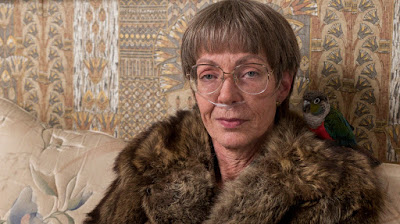 _DropDeadGorgeous_
LaugingOutLoud, my mind always goes back to the string of interviews after the “beauty queens
blowing chunks!” incident.
She’s comjngbout of the hotel room with a yummy young stud and announces to her friend back in
cowtown , “ i got some!”

I totally get your take on her in The Ice Storm. I guess if I had to say what comes to mind first when I hear her name (putting aside theater work - because otherwise I'd say Six Degrees of Separation), it's probably The Object of My Affection. Or maybe, on some days, 10 Things I Hate About You. But what's great about her (or one thing that is) is that something like 10 performances come to mind almost immediately, many of which are startlingly different from others, even though some of those memorable performances only amounted to a little bit of screen time.

She was so compelling in her virtually non-speaking role in American Beauty...

I first took note of her thanks to her role in Hairspray. "Devil child! Devil child!"

What's the movie on the cover pic? Love her in West Wing, The Hours and of course I Tonya.

You mean the site banner up top? That's Allen Payne & Bokeem Woodbine in JASON'S LYRIC, one of my 90s faves that seems too forgotten these days

Many thanks Jason. I will try to watch the movie now that you have piqued my interest.

Jennifer Aniston's name dropping sister in law in "The Object of my Affection". She lays down the law in that one, and still has time for hors d'oeuvres with the Spielbergs and Carly Simon.

Allison Janney is the probably the most smartest actress.

I was already aware of her, I'm sure, but American Beauty is when I sat up and really noticed her.

She was hilarious in "Spy," as Melissa McCarthy's humorless boss

I've admired Ms. Janney for a long time and was stoked to see her in "I, Tonya". However - I FELL for her in "The way-way back" - there was an immediate connection to her portrayal of the boozy neighbor. I have not missed a role of hers since. LOVE LOVE LOVED her since.

10 Things I Hate About You, obviously, how can you beat that role? :)

But she turns gold practically everything she's in, she's that great.

I worked with her for seven years when she did voice-over work for my client. I only mention this to confirm, she is an awesome human being!

I remember noticing her first in "The Hours" and thinking if I were a lesbian, I'd totally be into her

"Guiding light", the soap! I would watch it in Italy and remember I was constantly drawn to her and the writers must have noticed because she was a maid at the Spaulding's mansion and they would come up with any possible funny way to get her on screen. Of course she didn't stick around much on a daytime soap. Loved her in "the object of my affection", still one of my best movies ever, and also in "the way way back".