Well it's about time we got to see some Joel Kinnaman skin proper-like. Even though we have known for quite some time that he looks quite good without his clothes on he's kept it relatively mum on-screen (although we haven't seen much of his early work in Sweden, to be honest) - then in December came a quick flash of him next-to-nude in a teaser for Altered Carbon, an upcoming sci-fi series for Netflix, and I got my hopes up, and those hopes have come to fruition here with the extended trailer released today. Huzzah!

Altered Carbon is set in a futuristic dystopia where they have invented "technology to download consciousness so it can be placed in a storage – or a new human host – endlessly. This ability to cheat death is exclusively available to the wealthy, or those with particularly useful skill sets." So you know, the usual, all shot like Blade Runner to boot. But Joel's goopy cum-gutters will sure get me to watch so good work, guys. Here's the trailer:
.

.
The show drops on February 2nd. 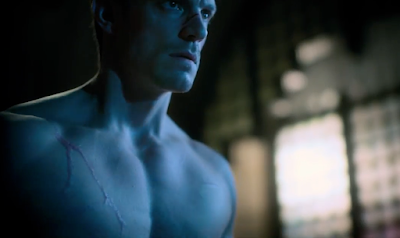 ETA Oh look I found a proper shot of Joel's bum! (via)

Just watched Altered Carbon; the man looks amazing - like the love child of Perry King and Eric Roberts with a bit of Keith Carradine in the mix...