This isn't going to be a substantial post (unlike the hefty posts we usually do on Call Me By Your Name) but I thought it'd be funny to collect images of all the times that Oliver (Armie Hammer) and Marzia (Esther Garrel) swap places visually through the film. It happens so often that it eventually becomes a punchline!

It starts right at the start with Oliver arriving at the Perlmans in the very first scene - he enters the house and within a minute Marzia is out the door, giving him a kiss on the cheek - a blessing to crawl into her man's bed right from the start!

When Oliver makes his sloppy handsy pass at Elio during the vollyball game (watch this scene here) he drags Marzia over and literally puts his hands where his hands had been, thinking he was mistaken about grabbing Elio and her hands were what Elio actually wanted. Oh if you only knew, Oliver!

Visually this swapping happens a bunch but thematically even more - whenever Elio is feeling ignored by Oliver he fills his time with Marzia, often wielding her like a weapon to make Oliver jealous. In the lead up to their Midnight Rendezvous Elio quite literally distracts himself all day long with Marzia, constantly checking his watch for the person he'd much rather be with.

I do think that there's good criticism of the film to be made (although I'd personally prefer it a woman who's been this through this experience be the one to write it, and not me) about the movie's treatment of Marzia and especially Chiara - I hate it when the audience laughs at Chiara's late appearance at the bus station; I just feel bad for her. 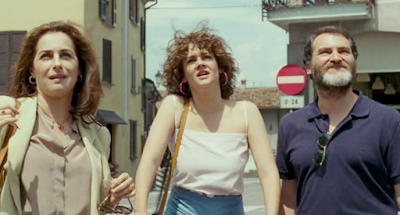 But! Not so fast! In the movie's defense I think the film feels bad for her too, which is why it stays there on the pavement with the Perlmans and gives us that sweet moment where Annella invites Chiara and Marzia over for dinner that night - if anybody gets it and is going to be generous with warmth and light and love in this moment it is of course Annella.

And of course... Oliver leaves. He leaves even Elio. And Elio goes home, and who is right there waiting for him with a declaration of her love and a great big needed hug?

I think the film's just honest, a little brutally at moments -- "Am I not your girl?" -- about the thorniness of relationships between men and women in these circumstances - whether Elio is bisexual or in the process of figuring out that he's full on gay this chapter, this hurting of a girl our age that loved us but that we weren't able to be what they wanted, it's just another piece of the puzzle that Call Me By Your Name gets so damn right it stings. 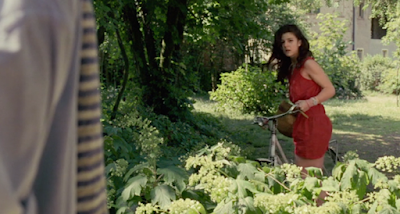 Edge of Seventeen was good about this, too

I completely agree, though I must say that I found sweet Marzia to be amazingly magnanimous!

In a way their relationship mirrors that of gay men in love with straight men. Marzia wanting what she can’t have except as an unloved physical release.

jesus i still want to see that movie, can you please stop posting so many gifs and pics about it !?! :D