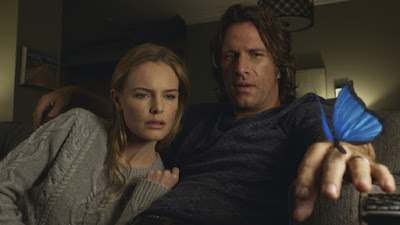 As much as I love horror movies I don't really technically scare all that easily anymore. I'm not a jumper. But there's one thing that is guaranteed to get my heart racing, works every time, and that's somebody being suffocated. Not being drowned, not being smothered with a pillow; it's more precise than that - it's that thing where something gets inside your throat and chokes you from the inside. (I know, I know - paging Dr. Freud.) Scenes like the Snake Alien Attack in Prometheus where the acid melts the helmet to that one dude's face, or even the scene in Sofia Coppola's Somewhere when Stephen Dorff gets the plaster mask of his head made and has to breathe through those two tiny nose slots...

Immediate panic attack for me. Well Before I Wake, the "new" horror film from Gerald's Game director Mike Flanagan, offers up a big brand new yicky addition to that most ghastly slot in the Cinematic Death Canon, and I am still yicked out, as the saying goes. Death comes in Before I Wake via a sleep demon that'd give the Slender Man second thoughts and who feeds on his victims by just sort of coating them in himself and believe you me this shit shook a shudder or two out of me but good.

I put "new" in quotes above because the film's been sitting on the shelf for a couple of years now (Jacob Tremblay looks exactly like he did in Room in 2015) until just recently dropping onto Netflix - I'm guessing this was part of the deal with Flanagan for Gerald's Game, or maybe just coincidence, but these two films of his would make a very fine double-feature if you're looking for a night of good creeps.

There's reason to be excited about Flanagan for those of us who care about good solid horror movie-making, because he keeps assembling good solid horror films out of scraps you don't think oughta make such things. Like how does the second Ouija movie turn out to be so scary? All of his entertainments so far seemingly fall into that hell-space of budgets just big enough to to be too big for horror movies, where the mite-too-cheap CG gets leaned on and murders the atmosphere, but he's almost entirely avoided that trap - his imagination for Scary Images, his eye for what actually works, has kept these things just on the right, sweet side of uncanny.

And he cares about his characters, giving them interesting challenges to overcome, while not being afraid to really Go There when necessary - Before I Wake is the ten millionth horror movie about parents mourning a dead child but it actually manages to grab ahold of that horror with two hands and shake the guts out of it at times; it violates decency with a couple of images in the way that horror is there for. Made for. (Picture Donald Sutherland cradling his daughter's drowned corpse in Don't Look Now, anguish shredding his face at the seams.) The bad guy in Before I Wake is bad in a way that feels genuinely bad.

I don't want to run out ahead of myself - Don't Look Now is Don't Look Now, and Before I Wake is not. It's not even Gerald's Game, which I found tremendously affecting thanks to some career-best work from Carla Gugino and Bruce Greenwood. But Kate Bosworth and Thomas Jane, who play the parents, and Tremblay especially as their new adopted boy, all turn in solid work here - Tremblay just walks on-screen and you want to protect him, and this movie exploits that feeling ruthlessly (I love how they cast all of his classmates older than him so he just always looks so so tiny all of the time). It's very much worth a look. Just don't hold your breath, guys.
.