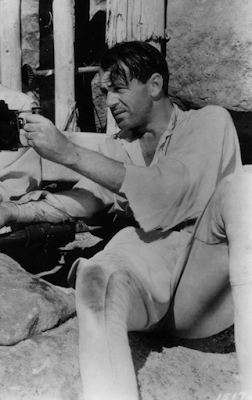 I'm talking about the other gun, you pervs... 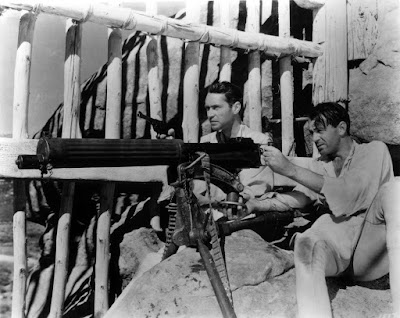 I mean really. Single track mind, y'all. Anyway this picture of Coop & His Double-Barreled Something-or-Other is from the 1935 film The Lives of a Bengal Lancer, which stars him alongside Franchot Tone and Richard Cromwell as a trio of soldiers in India yadda yadda we already did a post ogling the hell out of this movie a couple of years ago. I am not here for that! Well I was a second ago, but we've moved on!

No what we're here for is to direct you to The Film Experience where my pal Dan Walber just taught me something about this movie that I didn't know before. Having never actually sat down to watch the movie it's not surprising I have things to learn, but still. Learning's good! In Dan's column today on the production design for the classic musical Top Hat (which was nominated against Bengal Lancer at the Oscars that year) he shares this:

"This was the last year with only three nominees for Best Art Direction. The victory went to The Dark Angel, a drama of romance and World War One. Its biggest competition may have been The Lives of a Bengal Lancer, an imperial adventure set in the British Raj. It apparently promoted European superiority so effectively that Adolf Hitler saw it three times. It received seven nominations, winning for Best Assistant Director."


You see a movie a second time at most because you like the politics. You see a movie three times because you like how Gary Cooper fits his military trousers. I speak from experience. In all seriousness though it's little things like this that make Dan's weekly posts such a pleasure and a treat - go read the rest on Top Hat, which is one of the few musicals I unabashedly adore...