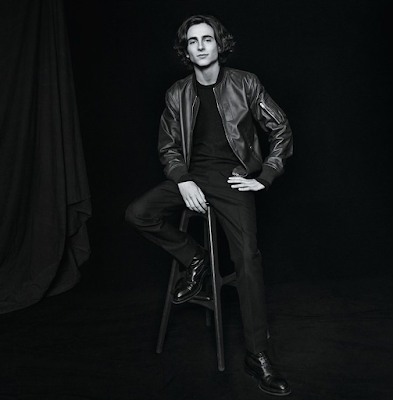 Okay okay I know I said earlier I was trying to be better about the Call Me By Your Name posts but in so doing, in bringing the subject up, I seem to have torn off the scab and my need is oozing all over again! Oh well! There's a great chat with the book's author André Aciman at Vulture today that you should read (but only if you've seen the movie already, there are spoilers there and there are spoilers I am about to dive into) and it right and properly addresses one of the complaints I've seen a couple of people have about the movie.

See, some people think that the final shot, the already legendary three-minute long stare at Timothée acting his beautiful face off, shouldn't have had the closing credits run along side of it. That they're a distraction. I don't agree, I think that serves a purpose, but let's read what André has to say about the end of the film:

"In the film, it’s very moving. You see Elio’s face looking at the fire, then the credits come up. I’m the author, I know how it’s going to end, so I’m not supposed to be surprised. But the moment the names came up — it’s the end of the movie, and you haven’t had quite time to process. We have to leave the film, but their love has not been resolved, there’s frustration all over place, and that’s the definition of subtle."

The appearance of the credits, in other words, reinforces the feeling of time slipping away with things still left unfinished. Earlier today I mentioned I'd love to write something longer about the fantastic editing done in the film, which smartly goes for this sensation time and time again - shots are cut a second too quickly, as if memory itself has snapped itself shut. I talked about one of these moments a long while back on Twitter...
.

When Oliver gets on train Luca does this edit as the door slams that switches perspectives, shifting Elio from L side to R... WITH MEANING
— Jason Adams (@JAMNPP) October 5, 2017

There are actually all these disorienting edits that make no sense spatially but EMOTIONALLY are astounding - guess I need to watch again!
— Jason Adams (@JAMNPP) October 5, 2017

.
That edit (and its one that's repeated a few times in the film) is purposefully jarring - it's like a glitch in The Matrix; it calls attention to itself in order to confuse our senses. Our brains feel like a record that's skipped. We immediately want that moment to be cleaner; its skittishness pains. Give us back what we just lost, we feel without realizing. And Call Me By Your Name wouldn't be so emotionally stirring if it didn't manage to hit the mark on that ache, that loss, so often. The credits intruding over the final shot, underlining the passage of time running through our fingers too fast, too fast, has a profound effect and works in concert with Timmy's deeply affecting performance - the friction's part of the point! 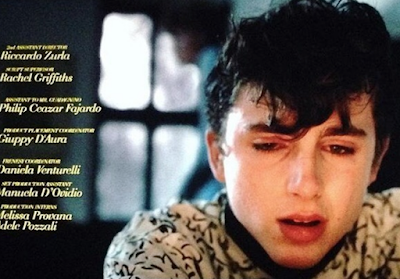 Anyway if you're new around here and want more of my thoughts on this movie (lord knows I have plenty) I recommend you read my recent piece at The Film Experience (there's more about the final shot included in that piece) and also that you read my first-time reaction to seeing the movie - I'm pretty proud of both of those pieces of writing.
.
Who? Jason Adams When? 4:42 PM

That fly was slightly annoying in the credits tho.