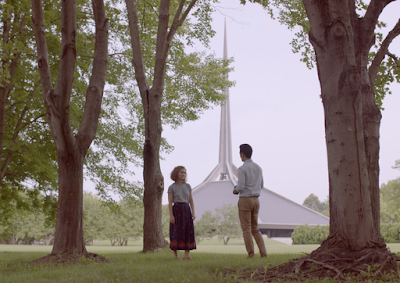 I have gotten a little bit behind on movie reviews so here are some quick thoughts on five films that I don't have it in me to write long thoughts on. They are in order from Best to Worst for no real reason whatsoever except my own personal kicks.

Columbus -- I wish somebody had let me know beforehand that this movie was both a love letter to the mid-century modernist architecture of Columbus, Indiana - you can read a great primer as to why Columbus has so much killer architecture right here - and a love letter to John Cho's butt in and out of khakis. Those are like all of my favorite things in one place! In all seriousness this movie is a gorgeously simple meditation on the intermingling of public and private spaces (which okay is a fancy way of saying "butts and belfries") - that is just to say that it would be hard not to fall in love with someone who stands under Eero Saarinen with you and too feels the holy spirit.

Ingrid Goes West -- While I still managed to post each and every trailer for this film before it came out (because every trailer gave us a little more of Billy Magnussen in his little short shorts) I still wasn't sold on it by those same trailers; it seemed like it was going to be a one-joke movie at the expense of social media, and in case you haven't noticed... I like social media. So color me face-slapped that this movie actually pushes deeper into the dark recesses of its themes, of mental health and modern disconnection, and that Aubrey Plaza is straight up super in it. I mean I wasn't surprised that Aubrey's great - she's always great, in her way.

But Ingrid really lets her root around in her already somewhat pigeonholed image like Jim Carrey did with The Cable Guy or Adam Sandler did with Punch-drunk Love and find curious and strange facets to that image that we haven't gotten to see before. She was up to the task. And this ain't a one-woman show either - Magnussen manages to spin his fuckable lunkhead image into nasty new territory himself, while O'Shea Jackson Jr. is a thousand watt charm goofball and Elisabeth Olsen is fiercely funny with her every avocado-toasted line delivery. This is a good movie! 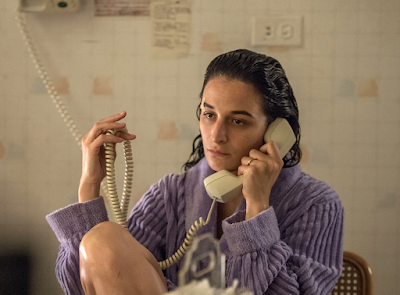 Landline -- Jenny Slate remains winningly adorable (her snort is halfway to becoming Marilyn's coo, trademark wise) and she's surrounded by very fine folks on all sides (it was especially lovely to see Finn Wittrock play an actual human being for a change, which American Horror Story has yet to cast him as) but at a certain point Landline just begins to feel like an excuse to string together a bunch of mid-90s references. Watch people go to rent videotapes! Watch people listen to World Music on headphones at the record store! Chokers and barrettes, oh my! I mean they got the details perfect - I felt like I was transported to High School at times - but all that stuff subsumed the story, which felt like rote stuff, and got sitcommier by the second. I guess all the abortion stuff really sharpened the edges of Obvious Child - Landline needed something like that. More abortion, I say!

Blade of the Immortal -- I have watched two movies in the past couple of weeks that felt so excruciatingly long that I began to wonder if I might drop dead and my bones disintegrate into ash before the final credits roll, and this is one of them. There is no reason for this movie, which has loudly been sold as Takashi Miike's 100th Film - to be just under two and a half hours long; the only thing I can think of is that Miike has clearly made some sort of deal with the devil that he's got to churn out one million minutes of movie before he turns 60 or he will lose him immortal soul. That's got to be it. But hey at least I got a fucking sword out of it!

Valerian and the City of a Thousand Planets -- This is the second movie that felt so excruciatingly long that I began to wonder if I might drop dead and my bones disintegrate into ash before the final credits roll.
.

More like Valerian and the Movie of a Thousand Minutes amirite
— Jason Adams (@JAMNPP) November 5, 2017

.
In Valerian's defense Cara Delevingne at least comes out of it not looking like this whole "acting thing" is as grave an error on her part as it looked coming out of Suicide Squad - she's actually pretty charming here. Which helps one surf somewhat gently, for awhile, across the endless, endless wastes of this loudly clanging pile of space debris. But only for awhile. The effects look good?

Delevingne and fantasies of slathering Dehaan's twink body in oil and going to town on him were the only things that sustained my interest.