Do Dump or Marry: Out the Rear Window 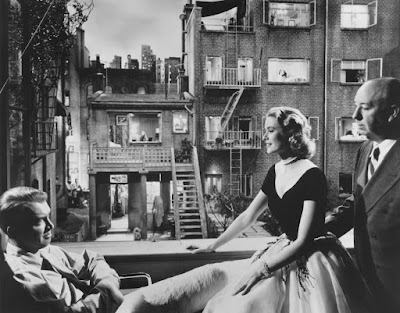 This Friday is the 63rd anniversary of my favorite movie (give or take a Rosemary's Baby) Alfred Hitchcock's Rear Window. According to Wiki, "A 'benefit world premiere' for the film, with United Nations officials and 'prominent members of the social and entertainment worlds' in attendance, was held on August 4, 1954 at the Rivoli Theatre in New York City, with proceeds going to the American-Korean Foundation." 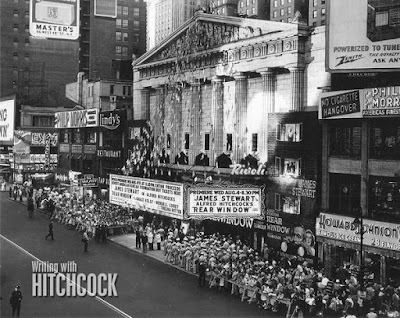 The premiere, pictured above, is said to have gathered two thousand gawkers according to movie critic Bosley Crowther's mixed review of the film in the New York Times on August 5th, 1954; listen to a little of ol' Bosley's nastiness towards the film itself:

"Mr. Hitchcock's film is not "significant." What it has to say about people and human nature is superficial and glib. But it does expose many facets of the loneliness of city life and it tacitly demonstrates the impulse of morbid curiosity. The purpose of it is sensation, and that it generally provides in the colorfulness of its detail and in the flood of menace toward the end."


Oh Boz, ya ol' coot. Anyway I've written so much about the movie in the past I didn't figure I had anything left in me when it occurred to me this might be fun: let's "Do Dump or Marry" the most prominent male neighbors...

To the left there's the Husband half of Newlyweds (played by Rand Harper), in the center there's the Salesman (played by Raymond Burr) and at the far right there's the Songwriter (played by Ross Bagdasarian). If you lived in Jimmy Stewart's apartment and you didn't have Grace Kelly coming to visit which character would you do, which'd you dump, and which'd ya marry? Tell in the comments!

Do: the Songwriter
Dump: the Salesman
Marry: the Newlywed

I'm afraid poor Raymond Burr is going to come a cropper here what with the salesman being a violent murderer and all.

I saw this movie so many times in the 90's, and then only rewatched it in the 00's a few months ago - it holds up like gangbusters.

DO The Newlywed (those curtains are closed for a LONG time)
DUMP The Salesman (I mean... you might get a nice ring out of the bargain but who knows how long you'll last... better to cut bait before it gets that far)
MARRY The Songwriter (handsome, throws great parties, and can support a family)

Dump all of the above.

The Salesman, because, you know, he's a killer.

The Newlywed, because he'd be one of those closeted, "No Homo, no way...but I do it with guys on the down-low."

The Songwriter, because he's played by Ross Bagdasarian, aka David Seville, who invented and voiced "Alvin and the Chipmunks," which has been a minor irritation for as long as I can remember. I'd be worried that, after sex, he'd break into song.