Do The Hustle. @darrencriss and @maxgreenfield on the set of The Assassination of Gianni Versace: American Crime Story
A post shared by Ryan Murphy (@mrrpmurphy) on May 5, 2017 at 7:25am PDT

Right on the heels of sending Darren Criss to stand around in public in the world's skimpiest red speedo American Crime Story (and so on) show-runner Ryan Murphy went and signed up for Instagram, and that above picture is the first he shared -- and it's news that Max Greenfield has joined the cast. No word on who he's playing. But seeing as how Max is an old pro in the "running around in public in a red speedo for a television show" department (he had to do it for The Mindy Show previously) it only seems right to ask... 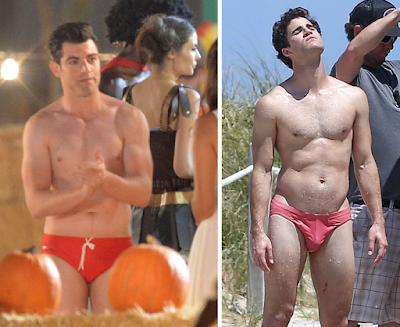 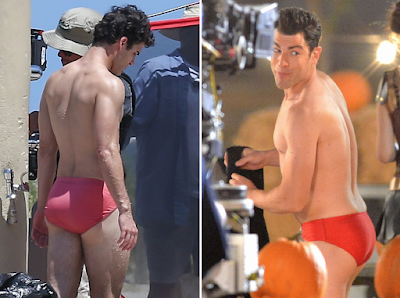 Murphy's also posted the first look at a monster mask that will be used in the next season of American Horror Story - you know, the one that's supposed to be set during the 2016 Election and include people actually playing Donald Trump and Hillary Clinton... sigh - and you'll want to get a look at that. It is the stuff of nightmares.
.
Who? Jason Adams When? 2:51 PM

Labels: Anatomy IN a Scene, Darren Criss, gratuitous, horror, Who Wore It Best?

Darren has the bigger D, but Max has the better A, so Max gets my vote.

There is only Darren in my plaid pants I mean world.