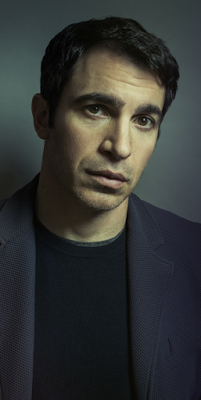 --- Big Man Messina - I'm all about sharing old news stories today, as long as they're about hot pieces of course - I totally missed that the oft-nude Chris Messina (who we just discovered last night is a miniature version of a person) was cast as the male lead in Sharp Objects opposite Amy Adams, which is basically Jean-Marc Vallee's Big Little Lies chick lit miniseries sequel. (I know that the term "chick lit" has fallen out of favor because it's seen as a negative but "melodrama" is also seen as a negative, by assholes, so who cares what assholes think.) Sharp Objects was written by Gone Girl author Gillian Flynn and it's about a reporter who just got out of the crazy house who has to go to her hometown to cover the murder of two young girls. Messina is a detective working on the case. He and Adams previously played lovey-dovey in that Julia Child movie, so they must've enjoyed the experience.

--- People Polley - Sarah Polley is in the middle of shooting her Margaret Atwood adaptation Alias Grace for Netflix and we don't know yet when that will be out but she's already announcing what she's doing next - she's signed on to direct a film of Zoe Whittall's 2016 book The Best Kind Of People, which is about a family whose patriarch is accused of sexual misconduct at the school he works at. Anybody read the book? It sounds like something Polley could make magic of, honestly. And I'm sure she could get any actors she wants at this point.

--- Hurrah For Handmaids - Speaking of Margaret Atwood though she's been doing the interview rounds which is always a welcome turn of events - I was riveted by this gigantic piece on her in The New Yorker; it's long but entirely worth it. And Time talked with her and the star of the upcoming Handmaid's Tale miniseries Elizabeth Moss too - you can read that right here. (thanks Mac)
.
--- Super Soldier - Josh Brolin has won the Cable sweepstakes over the likes of Michael Shannon and David Harbour, and will play the buzz-cutted future warrior in Deadpool 2 opposite the beloved beefcake honky Ryan Reynolds. So prepare yourselves for lots of wink wink insinuated sexual heat between Ryan and Josh, I guess. It won't go further than that because duh, but I am sure Ryan will have fun with that.

--- Childhood Sucks - I had totally forgotten that Let the Right One In was getting turned into a TV series by Teen Wolf creator Jeff Davis; I don't remember if I even mentioned it when it was announced. But I know I didn't mention this other news about it, which is actually six months old at this point but I can't believe I missed it - Thomas Kretschmann was cast in the role of a police inspector who's been chasing the vampire Eli around... a role that sounds a lot like Thomas' stab at Van Helsing for that crappy Dracula show, actually. What a weird thing to get typecast as. Anyway all the news about this show was about a pilot back in October so I'm not even sure it's actually a thing that is happening now.

--- And Speaking of horror shows that I forgot were happening a trailer was just released for the series of Stephen King's The Mist, which you can watch and read a little about over at The Film Experience. I wonder how they're fitting this in with the anthology King series called Castle Rock that JJ Abrams is producing for Hulu -- if there will be any big foggy monster overlap, I mean.

--- Hot Cha Cha - I've never seen the campy 1953 Joan Crawford movie called Torch Song but that didn't stop me from laughing my ass off at this take on the movie (as well as some criticism of Feud) over at Shadowplay. Specifically the bit about the movie's black-face routine, which... I mean, my god. Have any of you taken in the spectacle of this movie? I totally need to, right?

--- Peaks TV - The New York Times chatted with David Lynch about the new Twin Peaks, as much as anybody can "chat" with David Lynch - while he doesn't say anything as delightful as he did in that GQ interview I quoted a couple of weeks back he does make it clear that the new show is meant to be seen as a whole:

"Lynch himself will not answer questions pertaining to the plot of the new “Twin Peaks.” Additionally, he insists that the 18 individual installments of the series must be called parts, not episodes, offering a cogent auteur-like explanation: “This is a feature. An 18-hour feature, broken up into 18 parts.”

.
--- And Finally Finally a new trailer for the great-looking Gothic Trash My Cousin Rachel starring Rachel Weisz and Sam Claflin's Surprisingly Big Ass (which we previously discussed here) has been released and I have to say I really want to see this jazz, much to my shock and awe. I mean it's not so far out of my wheelhouse - I adore lurid Gothic Trash, with everybody sweating through their lacy things, after all - this movie just wasn't on my radar at all before the first trailer rolled around.
.